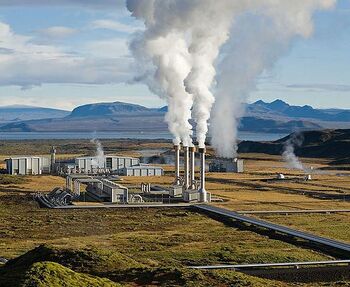 Steam is the vapor (gaseous) phase of water (H2O) usually generated by the boiling of water. When the steam does not contain any liquid water, it is known as dry steam and it is completely colorless. However, when the steam contains tiny droplets of condensed liquid water, it appears to the eye as a white cloud (see the steam being vented from a geothermal power plant in the adjacent photograph).

What is very often referred to as smoke from cooling towers and other vents in industrial facilities is water vapor which has partially condensed and is mistaken to be white smoke. Water aerosols and mists, such as those created by spray cans for misting house plants or certain types of humidifiers, may also create small visible clouds of water droplets, but aerosols, mists and fogs are not steam. Liquids other than water may also form visible clouds when vaporized, but they are not clouds of steam.

Steam is manufactured in industrial processes by the boiling and vaporization of liquid water. It also occurs naturally by being vented from volcanoes, fumaroles, geysers and other geothermal sources.

Steam has a great many industrial and domestic uses. Probably the most important and by far the largest use of steam is in nuclear, fossil fuel and geothermal power plants. 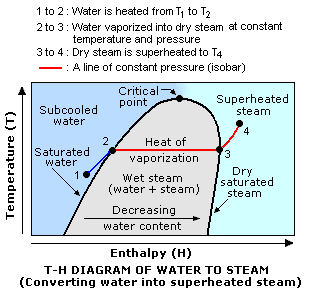 As shown in the adjacent diagram, there are three types of steam:

Referring to the adjacent drawing again, water is converted into wet, dry saturated or superheated steam in three steps:

Ways of producing steam from water include use of boilers or steam generators. Boilers are pressure vessels in which water is heated to produce pressurized steam, for generally heating houses or buildings, for steam engines, or a variety of other uses. Steam generators are devices or units, often including boilers (the definitions coincide greatly), for producing (generating) steam for power plant, industrial, or other uses. The size of steam generators ranges from bench top to very large units or sections of a thermal power plant. In the field of nuclear power plants, the term steam generator refers specifically to a particular very large heat exchanger used to thermally connect the primary (reactor plant) system to a secondary (steam plant) system in a pressurized water reactor (PWR) plant, which generates steam for the steam plant, of course.

The diagrams below schematically depict the equipment used in a conventional fuel-fired steam to electric power plant as well as the temperature-entropy (T-S) diagram of the corresponding Rankine cycle. A nuclear power plant differs only to the extent that the heat required by the boiler is provided by heat derived from a nuclear reactor.

Cogeneration of heat and power

Cogeneration is also referred to as combined heat and power or CHP. In electrical power generation, the turbine exhaust steam is typically condensed and returned to the boiler for re-use. However, in one form of cogeneration, all or part of the turbine exhaust steam is distributed through a district heating system to heat buildings rather than being condensed. The world's biggest steam cogeneration system is the district heating system which distributes steam from seven cogeneration plants to provide heating for 100,000 buildings in the city of New York.[8][9]

As an overall definition, a steam engine is an engine that uses steam to perform mechanical work. By that definition, steam turbines are steam engines. However, this section describes steam engines that use the expansion of steam to move a piston that performs work. Such steam engines were the driving force behind the Industrial Revolution of the 18th century and gained widespread commercial use for driving machinery in factories, powering water pumping stations and transport application such as railway locomotives, steamships and road vehicles. The use of tractors driven by steam engines led to an increase in the land available for agricultural cultivation.

Although largely replaced by steam turbines, stationary reciprocating steam engines are still used in industry and elsewhere for driving pumps, gas compressors and other types of machinery.

A great many processes in petroleum refineries, natural gas processing plants, petrochemical plants and other industrial facilities use steam as:

Sterilization
An autoclave, which uses steam under pressure, is used in microbiology laboratories and similar environments for sterilization; autoclaving is also a major method for industrial and home canning of food

Agricultural
In agriculture, steam is used for soil sterilization to avoid the use of harmful chemical agents and increase soil health.

Commercial and domestic uses
Steam's capability to transfer heat is also used in the home as well as commercial facilities for pressure cookers, steam cleaning of fabrics and carpets, steam ironing and for heating of buildings.

Steam tables provide tabulated thermodynamic data for the liquid and vapor phases of water. The table below is only an example of the type of data provided. In a complete set of steam tables, the table would provide data in temperature increments of 1 °C. The complete steam tables would also provide a similar "Saturated Steam:Pressure Table" in which the first column would have pressure values and the second column would be temperature values. Most steam tables include tabulated thermodynamic data for superheated steam as well.

Mollier diagrams are graphical representations of the thermodynamic properties of materials involving "Enthalpy" as one of the coordinates. Mollier diagrams are named after Richard Mollier (1863 - 1935), a professor at Dresden University in Germany, who pioneered the graphical display of the relationship of temperature, pressure, enthalpy, entropy and volume of steam (as well as for moist air) that has aided in the teaching of thermodynamics to many generations of engineers. His enthalpy-entropy (H-S) diagram for steam was first published in 1904.[11][12]

A sample Mollier diagram for steam is presented below and others are available online:[13][14][15] 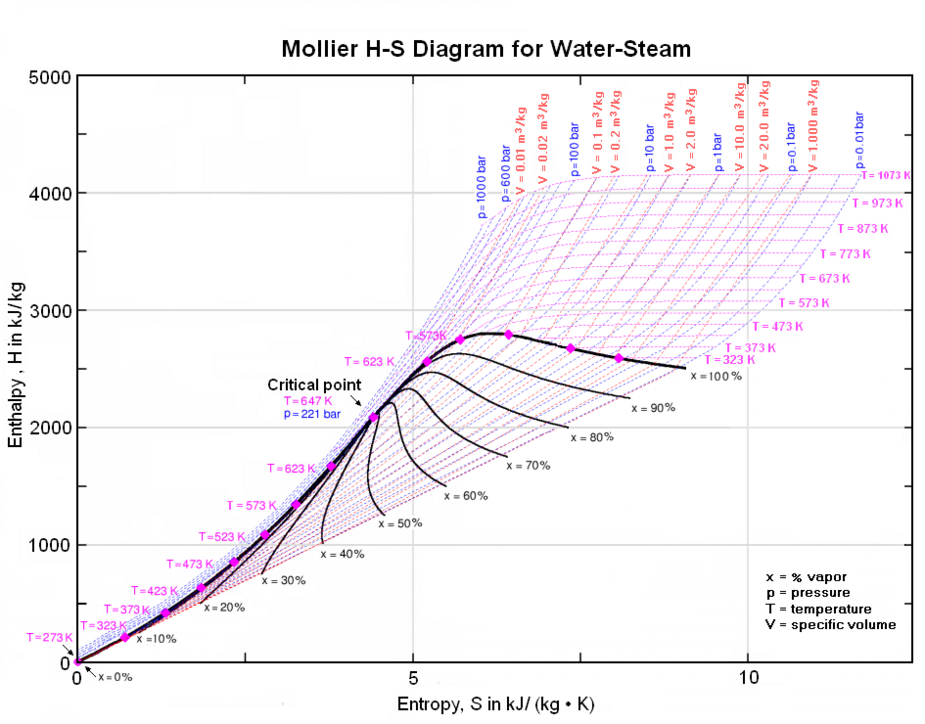