(CC) Image: Milton Beychok
Figure 1: Schematic diagram of a typical injector or ejector. For a steam-jet ejector, the motive fluid is steam.

An injector, ejector, steam ejector or steam injector is a device that uses the Venturi effect of a converging-diverging nozzle to convert the pressure energy of a motive fluid to velocity energy which creates a low pressure zone that draws in and entrains a suction fluid and then recompresses the mixed fluids by converting velocity energy back into pressure energy. The motive fluid may be a liquid, steam or any other gas. The entrained suction fluid may be a gas, a liquid, a slurry, or a dust-laden gas stream.[1][2]

Figure 1 depicts a typical modern ejector or injector. It consists of a motive fluid inlet nozzle and a converging-diverging outlet nozzle. Water, air, steam, or any other fluid at high pressure provides the motive force at the inlet.

Depending on the specific application, an injector is commonly also called an eductor-jet pump, a water eductor, a vacuum ejector, a steam-jet ejector, or an aspirator.

The compression ratio of the injector,

, is defined as ratio of the injector's outlet pressure

to the inlet pressure of the suction fluid

The entrainment ratio of the injector,

, is defined as the amount of motive fluid

(in kg/hr) required to entrain and compress a given amount

The compression ratio and the entrainment ratio are key parameters in designing an injector or ejector. 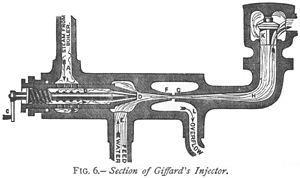 The injector was invented by a Frenchman, Henri Giffard, in 1858[3] and patented in the United Kingdom by Messrs. Sharp Stewart & Co. of Glasgow. Motive force was provided at the inlet by high-pressure steam.

The injector was originally used in the steam-generating boilers of steam locomotives for injecting or pumping the boiler feedwater to and from the boiler. Fresh water was entrained by the steam jet, and both steam and water entered a convergent combining cone which mixed them thoroughly so that the water condensed the steam. The condensate mixture then entered a divergent delivery cone which slowed down the jet, and thus built up the pressure to above that of the boiler. An overflow was required for excess steam or water to discharge, especially during starting. There was at least one check valve between the exit of the injector and the boiler to prevent back flow, and usually a valve to prevent air being sucked in at the overflow.

After some initial skepticism, the injector was widely adopted as an alternative to mechanical pumps in steam-driven locomotives. The injectors were simple and reliable, and they were thermally efficient.

Steam locomotives dominated rail transport from the mid-19th century until the mid-20th century, after which they were superseded by diesel and electric locomotives.

The use of injectors (or ejectors) in various industrial applications has become quite common due to their relative simplicity and adaptability. For example:

Similar devices called aspirators based on the same operating principle are used in laboratories.

For suction pressure below 100 mbar absolute (1.5 psia), more than one steam-driven ejector will be used in series, usually with steam condensers between the ejector stages. Condensing of motive steam greatly improves the efficiency of the set of ejectors. Both barometric condensers and shell-and-tube surface condensers are used for this purpose.