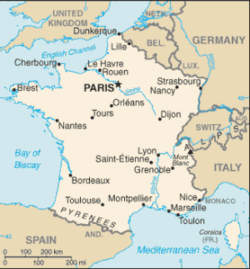 France officially the French Republic (French: République française), is a country in western Europe. Its mainland territory, referred to as the Hexagone because of its geometric shape, extends from the English Channel to the Mediterranean Sea, and from the Atlantic Ocean to the Rhine and the Alps. France borders Belgium, Luxembourg, Germany, Switzerland, Italy, Monaco, Andorra and Spain. The Channel Tunnel also links France to the United Kingdom. This territory, together with the island of Corsica off the west coast of Italy, constitutes Metropolitan France. In addition, the five Overseas Departments of Guyane (in South America), Guadeloupe and Martinique (in the Caribbean) and La Réunion and Mayotte (in the Indian Ocean) are governed by French law, represented in the French Parliament and included in the European Union. Various other territories around the world, while having their own laws and not included in the EU, are also represented in the legislature. Guyane has land borders with Brazil and Suriname, while the territory of Saint Martin has one with an overseas territory of the Netherlands. Territory claimed by France in Antarctica borders territory claimed by Australia, and has point contact at the South Pole with territories claimed by the UK, New Zealand, Argentina, Chile and Norway.[1]

With nearly 62 million inhabitants in its metropolitan territory, France is one of the most populated nations in Europe. French people benefit from high living standards provided by one of the oldest industrial powers. The economy is characterized by a combination of free-market capitalism and traditional interventionism.

French culture has been deeply influenced by Roman civilisation and Christianity since antiquity. The Enlightenment and the following French Revolution gave France its current political shape, a democratic republic whose main fundamental principles are expressed in the Declaration of the Rights of Man and of the Citizen.

The capital, Paris, is also the most populated country's city and accounts for more than a quarter of the gross domestic product. The city and its region also host most of the governmental and economic bodies as well as the best-renowned educational institutions.

In competition with the United Kingdom, France was one of the world's foremost powers from the seventeenth to the twentieth century. The First and Second World Wars and the loss of its huge colonial empire reduced France's prominence during the twentieth century. Despite this, France remains an important economic and political power, one of the five permanent members of the United Nations Security Council and an acknowledged nuclear power. It is a member of the European Union, the United Nations and NATO.

The current president and head of state has been Emmanuel Macrone since 14th May 2017e.

The Merovingian and Carolingian Eras

The Reformation and the Wars of Religion

From Richelieu to Louis XIV

The Late Ancien Regime and the French Revolution

France in the 19th Century

The World Wars and after