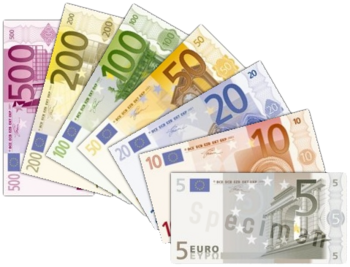 © Image: The European Central Bank
The euro banknotes. There are seven denominations, all having a distinctive size and color. 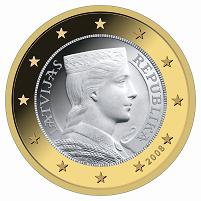 Facsimile image of a one-euro coin, issued by Latvia, which plans to adopt the euro by about 2013.
© Image courtesy of Bank of Latvia.

The euro was introduced to world financial markets as an accounting currency in 1999 and launched as physical coins and banknotes in most of the above countries in 2002.

The euro is divided into 100 cents (sometimes referred to as euro cents). All euro coins (including the €2 commemorative coins) have a common side showing the denomination (value) with the EU-countries in the background and a national side showing an image specifically chosen by the country that issued the coin. All coins can be used in all member states.

The euro coins are €2, €1, 50c, 20c, 10c, 5c, 2c and 1c (known as tinies for their small size), though the latter two are not minted in Finland or the Netherlands (but are still legal tender). Many shop owners in the eurozone prefer having all their prices end in 0 or 5 cents, so that 1c and 2c coins are not needed.

The ECB has set up a clearing system for large euro transactions (TARGET). All intra-eurozone transfers shall cost the same as a domestic one. This is true for retail payments, although several ECB payment methods can be used. Credit card charging and ATM withdrawals within the eurozone are also charged as if they were domestic. The ECB hasn't standardized paper based payment orders, such as cheques; these are still domestic-based.

A special euro currency sign (€) was designed after a public survey had narrowed the original ten proposals down to two. The European Commission then chose the final design. The eventual winner was a design allegedly created by a team of four experts who have not been officially named. The official story of the design history of the euro sign is disputed by Arthur Eisenmenger, a former chief graphic designer for the EEC, who claims to have created it as a generic symbol of Europe.

The glyph is (according to the European Commission) "a combination of the Greek epsilon, as a sign of the weight of European civilization; an E for Europe; and the parallel lines crossing through standing for the stability of the euro".

The European Commission also specified a euro logo with exact proportions and foreground/background colour tones.[2] Although some font designers simply copied the exact shape of this logo as the euro sign in their fonts, most designed their own variants, often based upon the capital letter C in the respective font so that currency signs have the same width as Arabic numerals.[3]

Due to differences in national conventions for rounding and significant digits, all conversion between the national currencies had to be carried out using the process of triangulation via the euro. The definitive values in euro of these subdivisions (which represent the exchange rates at which the currency entered the euro) are shown at right.

The rates were determined by the Council of the European Union, based on a recommendation from the European Commission based on the market rates on 31 December 1998, so that one ECU (European Currency Unit) would equal one euro. (The European Currency Unit was an accounting unit used by the EU, based on the currencies of the member states; it was not a currency in its own right.) These rates were set by Council Regulation 2866/98 (EC), of 31 December 1998. They could not be set earlier, because the ECU depended on the closing exchange rate of the non-euro currencies (principally the pound sterling) that day.

The currency was introduced in non-physical form (travellers' cheques, electronic transfers, banking, etc.) at midnight on 1 January 1999, when the national currencies of participating countries (the eurozone) ceased to exist independently in that their exchange rates were locked at fixed rates against each other, effectively making them mere non-decimal subdivisions of the euro. The euro thus became the successor to the European Currency Unit (ECU). The notes and coins for the old currencies, however, continued to be used as legal tender until new notes and coins were introduced on 1 January 2002.

The changeover period during which the former currencies' notes and coins were exchanged for those of the euro lasted about two months, until 28 February 2002. The official date on which the national currencies ceased to be legal tender varied from member state to member state. The earliest date was in Germany; the mark officially ceased to be legal tender on 31 December 2001, though the exchange period lasted two months. The final date was 28 February 2002, by which all national currencies ceased to be legal tender in their respective member states. However, even after the official date, they continued to be accepted by national central banks for several years up to forever in Austria, Germany, Ireland, and Spain. The earliest coins to become non-convertible were the Portuguese escudos, which ceased to have monetary value after 31 December 2002, although banknotes remain exchangeable until 2022.

Several linguistic issues have arisen in relation to the spelling of the words euro and cent in the many languages of the member states of the European Union, as well as in relation to grammar and the formation of plurals. The official spelling of the euro according to the ECB, as it appears (in capitals) on the banknotes, is "euro" in the Latin script and "ευρω" in the Greek script. The proposed official spelling by the ECB in the Cyrillic script is "еуро". However, the new EU member Bulgaria proposes "евро", the spelling that is currently used in Bulgaria. "Eвро", as well as "evro", although official spellings in some countries using the euro, are currently not supported by the ECB. Also not supported is the spelling used in Malta, where "ewro" derives from "Ewropa".

In each country except Greece, which uses λεπτό (lepto, singular) and λεπτά (lepta, plural) on its coins, the form "cent" is officially required to be used in legislation in both the singular and in the plural. Immutable word formations have been encouraged by the European Commission in usage with official EU legislation (originally in order to ensure uniform presentation on the banknotes), but the unofficial practice concerning the mutability (or not) of the words differs between the member states and their languages. The subject has led to much debate and controversy.