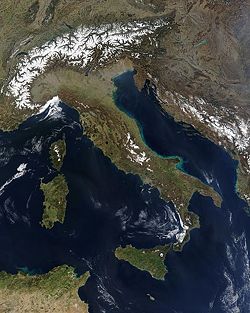 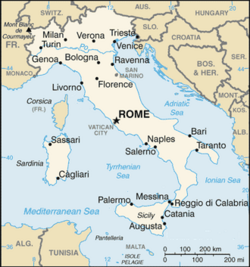 Italy (Italian: Italia), officially known as the Italian Republic (Italian: Repubblica Italiana), is a state of Southern Europe and founding member of the European Union. Its capital city is Rome.

Italy consists of twenty regions, which encompass almost all of the Italian peninsula and most of the Mediterranean islands surrounding it, including the two largest ones, Sicily and Sardinia. Italy's northern border is largely defined by the Alps, which separate it from neighbouring France, Switzerland (whose territory includes the Italian exclave of Campione d'Italia), Austria, and Slovenia (proceeding west to east). The Italian peninsula also includes two sovereign states as land-locked enclaves within Italian territory: San Marino and the Vatican City.

Today Italy is a developed country (7th by GDP and 17th by Human Development Index in the world), integral part of the European Union (having hosted the signing of the Treaty of Rome in 1957), and also a member of the G8, NATO, Council of Europe, and United Nations. The current President of the Italian Republic is Giorgio Napolitano, and the current President of the Council of Ministers is Enrico Letta. Italy has a little less than 60 million inhabitants who mainly speak the Italian language (although considerable linguistic minorities exist), and struggles to accommodate constantly escalating immigration (especially from Africa and Eastern Europe) in the transition towards a multi-ethnic society.

Some accounts by Thucydides and Virgil suggest that Italy derived its name from an early leader named Italus, but historical evidence is not firm.

Italy was the cradle of various ancient cultures, including that of the Etruscans but most notably that of Ancient Rome, which made it the centre of Western civilisation during the Roman Empire. The last emperor of the Western Roman Empire, Romulus Augustus, was deposed in 476. The transition from the Roman Empire to the Middle Ages has long been regarded as a "Dark Age" in Western Europe, however modern scholarly approaches have shown that there was a degree of continuity.[1][2] A series of invasions followed the end of Romulus Augutus' reign. In 489 the Ostrogoths took control of Italy, while between 535 and 553 Justinian, emperor of the Eastern Roman Empire, attempted to bring Italy under his direct control. Though he was successful the campaign against the Ostrogoths left Italy weakened and in 569 the north of the country was conquered by the Lombards.[3]

For several centuries, Italy, though united by a common language, was a collection of individual states. It nonetheless continued to play important roles at various times in Western history, be it on the grounds of financial influence (the medieval Marine Republics and early banks), religious importance (as the seat of the Roman Catholic Church), or its artistic and cultural prominence (most notably during the Italian Renaissance). Machiavelli vainly urged the Medici of Florence to take the lead in its unification. The peninsula fell under the influence of Austria, which tried to ensure that it remained divided. In 1849, following the failure of nationalist uprisings, Metternich famously stated in a letter that "Italy is a geographical expression". The events of the Risorgimento, leading to the unification of most of the country under the Savoy monarchy in 1860/61 proved him wrong. After winning World War I and becoming a dictatorship under Italian fascism in 1922, Italy suffered heavily from World War II. In the post-war period, Italy discarded monarchy in favour of the current democratic parliamentary republic and underwent an "economic boom" which ferried the country from agricultural to an industrial and service economy.