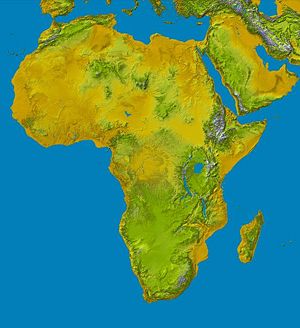 Africa is the birthplace of humanity,[1] the continent where humans originated. The theory that humans originated in Africa was postulated by Charles Darwin and later advocated by Louis Leakey, a suggestion that subjected him to derision at the time, but has since been proven. Humans began as just one species among a rich variety of plant and animal life, but in Africa's jungles, deserts and savannas, they built societies that in some cases became empires. African communities, tribes and nations acted as custodians or exploiters of their continent's heritage. Later, other groups of humans returned to Africa seeking fortune (by means of mineralwealth or slaves) or lasting fame for exploration and scientific discoveries. Peoples who find their roots in Africa now live all over the world as a consequence of slavery, colonialism, immigration and warfare.

Africa was once the playground of Europe's empires, with others occasionally claiming ownership of its lands and people. As a result, today's political boundaries rarely match up with ethnic, linguistic or cultural divides. Most of Africa's 54 countries use European languages or Arabic for official purposes, allowing them to speak both to the descendants of the peoples who exploited them and to new groups who now call Africa home. At the same time, Africa hosts much of the planet's linguistic diversity, as much as a third of all the world's languages. The continent also contains a treasure of more material wealth - gold, diamond, coal and other commodities bought and sold legally or on a flourishing black market.

Africa is Earth's second-largest continent, with about 20% of its population - about 900,000,000 people. With only South Africa a developed country, many Africans endure a standard of living well below those of us used to the comforts of the West. Poverty, disease, dictatorship, famine and war are words that seem to occur close to the name of Africa, and it is true that Africans' influence in world affairs is well short of what would be expected given their numbers and natural resources. However, while Africa and the world are still coming to terms with the post-colonial era, the continent is organising itself on African lines - the African Union being an example of co-operation between the states. In the future, Africa is expected to play a significant role in world prosperity as its peoples step out of the shadow of their recent past. 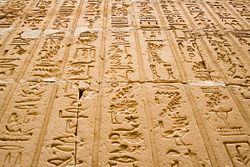 Though Egyptian hieroglyphs are a well-known example of African writing, the continent is often stereotyped as the land of spoken language - of oral history, tribal chants and traditional storytelling. However, though it is true that many African languages are unwritten and many Africans are nonliterate, the cultures of this region have produced substantial works of literature and much eminent scholarship, well before the arrival of European languages and the literacy drives of Christian and other missionaries, aimed at stamping out indigenous beliefs and encouraging Africans to embrace the Bible or the Qur'an. 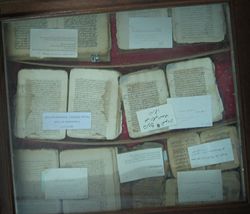 Academic literature was firmly established in Sub-Saharan Africa by the sixteenth century, particularly once Arabic had spread to many corners of the region. At Timbuktu in modern-day Mali, for example, African scholars produced and archived a vast collection of tomes on mathematics, astronomy, biology and other topics, often developed independently from the rest of the world. Most of these texts were written in Arabic, but some appeared in indigenous languages such as Hausa and Songhai. This information made its way north and westwards into other Islamic areas, and connections were also made and maintained with the Middle East and the wider world. Manuscripts have also turned up as far south as Tanzania, indicating that central Africa was a powerhouse of learning at the time.[2]