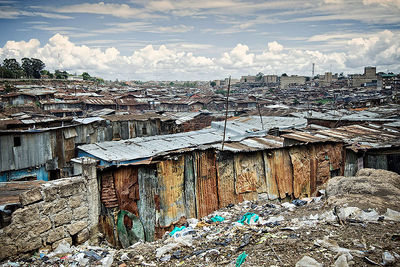 The Mathare Valley slum near Nairobi, Kenya, in 2009.

Poverty is deprivation based on lack of material resources. The concept is value-based and political. Hence its definition, causes and remedies (and the possibility of remedies) are highly contentious.[1] The word poverty may also be used figuratively to indicate a lack, instead of material goods or money, of any kind of quality, as in a poverty of imagination.

The use of the terms primary and secondary poverty dates back to Seebohm Rowntree, who conducted the second British survey to calculate the extent of poverty. This was carried out in York and was published in 1899. He defined primary poverty as having insufficient income to “obtain the minimum necessaries for the maintenance of merely physical efficiency”. In secondary poverty, the income “would be sufficient for the maintenance of merely physical efficiency were it not that some portion of it is absorbed by some other expenditure.” Even with these rigorous criteria he found that 9.9% of the population was in primary poverty and a further 17.9% in secondary.[2]

More recent definitions tend to use the terms absolute and comparative poverty. Absolute is in line with Rowntree's primary poverty, but comparative poverty is usually expressed in terms of ability to play a part in the society in which a person lives. Comparative poverty will thus vary from one country to another.[3] The difficulty of definition is illustrated by the fact that a recession can actually reduce "poverty".

In 1995 the United Nations' World Summit on Social Development, held in Copenhagen, adopted definitions of absolute poverty and overall poverty.

Absolute poverty was defined as a condition characterised by severe deprivation of basic human needs, including food, safe drinking water, sanitation facilities, health, shelter, education and information. It depends not only on income but also on access to services.

Overall poverty  was said to take various forms, including: lack of income and productive resources to ensure sustainable livelihoods; hunger and malnutrition; ill health; limited or lack of access to education and other basic services; increased morbidity and mortality from illness; homelessness and inadequate housing; unsafe environments and social discrimination and exclusion. It is also characterised by lack of participation in decision making and in civil, social and cultural life. It occurs in all countries: as mass poverty in many developing countries, pockets of poverty amid wealth in developed countries, loss of livelihoods as a result of economic recession, sudden poverty as a result of disaster or conflict, the poverty of low-wage workers, and the utter destitution of people who fall outside family support systems, social institutions and safety nets.

In 2007 the UN General Assembly adopted a definition of child poverty: Children living in poverty are deprived of nutrition, water and sanitation facilities, access to basic health-care services, shelter, education, participation and protection, and that while a severe lack of goods and services hurts every human being, it is most threatening and harmful to children, leaving them unable to enjoy their rights, to reach their full potential and to participate as full members of the society.[4]

In a religious context, voluntary poverty is the state of disburdening oneself of material possessions in order to achieve a higher purpose. It is normally assumed that the person concerned has the means to maintain a healthy life. It is not a concept considered in most discussions of poverty, and is not further discussed in this article.

The causes of poverty most often considered are:

As noted above, most of these, or the extent to which they can be, or should be changed, are matters of heated controversy.

Rowntree posited five periods in the life cycle for going into and out of poverty:

Action taken by governments to reduce or remove poverty include:

Collective bargaining has provided a means of increasing the income of workers, but historically trade unions have done little to benefit the very poorest.

For charities to provide a monetary subsidy to incomes is rare. When it has occurred, it would normally be aimed at a distinct group of people (e g "distressed gentlefolk" or families of members of the armed forces), or else at enabling access to a service, particularly education, in which case it is dependent on that service being taken up. Some commercial companies set aside funds for assisting customers in difficulty.

Some direct help may be given, such as food banks or children's holidays.

Voluntary organisations are particularly concerned with advice and campaigning, in which the quantified information obtained from giving advice is used for campaigning. As regulations become increasingly complex, advice becomes increasingly necessary.

See also Poverty elimination and the links there.

In 2000, the United Nations adopted the United Nations Millennium Declaration, committing member states to significant goals for the elimination of extreme poverty, with certain targets to be attained by 2015. Long before then, developed countries had programmes of aid to developing countries. The criticism often made of these programmes is that they were channelled through the government of the receiving country, and were liable to be diverted by corrupt practices. Efforts have been made to tighten up on getting aid through to the people targeted.

There are numerous non-governmental organisations working in the international aid field. Typically their programmes are on a smaller scale than government ones, with greater control over where the money goes. Many of the same organisations are also working on disaster relief, which they regard as separate from the long-term infrastructure work.

Fair Trade is a non-governmental initiative designed to give co-operative producers in developing countries a reasonable price for their products. Some major retailers have supported it for certain items. Other distributors and retailers have set up a rival scheme which is not as demanding in the support given to producers. The Fair Trade system has been criticised, on the one hand as being anti-competitive, and on the other, as having a model which disadvantages the poorest countries and producers.[8]