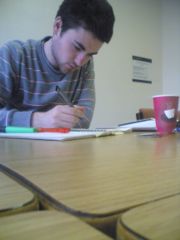 Formal education is organized teaching and training; it is the application of pedagogy, a body of theoretical and applied research relating to teaching and learning. This is usually done through schools, universities, colleges and other institutions. Such institutions will measure educational attainment through a process of examinations, often leading to diplomas, academic degrees, and other credentials.

The term informal education may be used to refer to learning that occurs outside the context of a formal educational program. Those who teach get the sort of education traditionally associated with schools and universities exclusively under their own direction are called autodidacts or self-taught. Those who study by themselves after having attended a university are less often called autodidacts but are instead said to be pursuing lifelong learning (or adult education or continuing education, although the latter terms usually imply learning in a formal context). The training of the mind with the active assistance of learned scholars--that is, what usually happens at a university--is often held to be crucial to securing a credible education, but this is a matter of some debate.

The reasons given for getting an education or requiring that others are educated are plentiful. Learning skills can be vital for certain types of employment, and even education in the humanities is often done for the reason that it demonstrates a mental agility, an ability to creatively solve problems that many in the business world find attractive. Many people learn for learning's sake: because a subject is interesting even if it has no practical or commercial application. Societies often require that a child be given an education to prepare him for citizenship and for employment. In countries where schooling is not compulsory, some families choose not to send their children to schools, instead giving them a homeschool education, or sometimes even a very non-traditional education through unschooling. Education can be a public benefit in as much as it prevents people from engaging in destructive acts.

Education can also be for perhaps less savory purposes: political or religious indoctrination. The power of educational institutions to influence people's minds has been used by cults and by totalitarian states to push their ideology and beliefs without any question.

Education--in the sense of formal schooling--is divided by English speakers into primary, secondary, and post-secondary (or tertiary) education. Primary education takes place approximately between the ages of 4-6 and 11-13, depending on the country or locality, and is usually focused on "reading, writing, and arithmetic," and other such basic subjects. Secondary education occurs after that, and typically spans ages 12-14 through age 16-18. Post-secondary education (or tertiary) refers to university and vocational education; it has no set age but is usually conducted in the student's late teen years and early 20s.

At the secondary, post-secondary, and especially the graduate school level, education is often distinguished into broadly "academic" education, versus "vocational" or "professional" education. The approach taken and subjects studied depend crucially on what the purpose of education is held to be. Academic education is thought, at least by its advocates, to prepare the mind in some general way, simply to improve the person and applicable to all careers. Vocational education is thought to prepare young people more directly, especially those who would be bored and turned off by more academic education for careers. Professional education can have academic or theoretical components but is generally aimed at preparing a person to enter a profession.

Adult education usually refers to the learning by students beyond the college age as part of life-long-learning. It is also known as Continuing education. The programs are usually deliberately designed to satisfy the learning needs or interests of persons who are over statutory age and whose primary activity is usually no longer in education.

Distance learning could be through print materials, online courses, radio or interactive television or 2-way video-conferencing modes. Further, a part-distance, part-contact or hybrid or blended modality is also practiced by many.

To help make the process of education more optimal, psychologists, sociologists and other social sciences have attempted to understand the process that people go through when learning, and to apply those insights in schools and universities, when training teachers and writing textbooks. Psychologists like Lawrence Kohlberg and Jean Piaget have put forward theories of how children develop through a variety of stages, whereas psychiatrists and neurologists deal with learning disorders, and evolutionary psychologists investigate the biological bases for different kinds of learning.

It is widely recognised that people often have wide differences in how they learn - what some teachers and psychologists call style of learning[1]. Some will find that they are 'visual-spatial' learners, and find learning easier if ideas are represented through graphics or images. 'Sensory' learners tend to need to feel involved in learning - physical learning tools like toys and games are oten used to help those who learn in this manner. Others tend to learn better through audio-visual presentations. The variety of different learning styles has forced teachers to be more flexible in how they teach.

Other areas of interest for psychologists studying education include motivation and learning goals, the inhibitors to people studying including procrastination, anti-intellectual peer groups, class size and school size.

Because of the wide-ranging effects of education and schooling, debates about the best way to educate are often some of the thorniest political issues.

One issue where conflict has arisen is curriculum - the subject matter taught in schools and the way in which it is presented.

Political groups often lobby for their particular ideas to be given classroom time: whether that means creationism or intelligent design, comparative religion compared to specific religious instruction, abstinence-only sex education, which parts of history to emphasize or some forms of political correctness. Moral issues like sex, drug abuse and relationships are often of concern for parents.

There has been debate over the value of vocational education, with schools now offering work-based training courses in addition to academic teaching. In the United Kingdom, there is the fear that vocational education is not widely respected or understood, and calls on the government to ensure parity between academic and vocational education. Some politicians have even questioned the value of "education for it's own sake" - former British Education Secretary Charles Clarke one stated that study of the classics - and, by extension, other arts subjects - was "a bit dodgy" and that students "need a relationship with the workplace"[2]. Only a few years later, and companies like McDonald's, train operator Network Rail and airline Flybe have been awarded the ability to grant qualifications[3][4][5], and the British government is planning to roll out a new 'diploma' system which would have academic and vocational qualifications declared equals.

Another debate that has come to fore in the United States, mostly during the administration of Bill Clinton, is that of uniforms[6][7]. Studies have been conducted into whether or not uniforms reduce gangs, bullying and fashion, while others argue that mandatory uniform or dress code requirements interfere with the free speech rights of pupils.