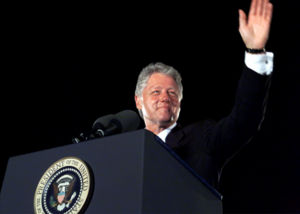 President Clinton during a visit to Japan, July 2000

Bill Clinton (William Jefferson Clinton, born William Jefferson Blythe III, 1946) was the Democratic 42nd President of the United States, elected in 1992 and reelected in 1996. Previously he had served as governor of Arkansas. His administration was characterized by sustained prosperity, a budget surplus, free trade internationally, military interventions in southeastern Europe, reform of the New Deal welfare system, and an impeachment by the House of Representatives. In the Senate, Clinton was acquitted and remained in office. Clinton, a policy wonk, was (with Ronald Reagan) one of the two best campaigners in recent decades. Although a mediocre speaker Clinton became known as "the Great Campaigner." His discursive style is personal and intimate, yet, thanks to television, was vicariously enjoyed by large audiences. Like Ronald Reagan. Clinton used his rhetorical skills to achieve political success; he survived despite legislative defeats, repeated scandal (he was notorious as a womanizer) and an actual impeachment.[1]

After leaving the White House, he became a very well-paid speaker. His wife, Hillary Clinton, was elected to the Senate in 2000 from New York, reelected in 2006, and in 2007 was the frontrunner for the Democratic presidential nomination in 2008. Clinton has become a major fundraiser and campaigner for his wife, with his special appeal to the African American vote to neutralize her main opponent, Barack Obama. Despite his historic ties with the African American community, Obama managed to secure over 90% of the African American vote throughout the primaries.

Clinton was born August 19, 1946 in Hope, Arkansas, a month after his father William Jefferson Blythe II, a salesman, was killed in an auto accident. He was raised by his maternal grandparents until age 4, when his mother Virginia Kelly, a nurse, married Roger Clinton, a car dealer. Roger was an alcoholic and violent; the marriage was tempestuous, including a divorce and a remarriage in 1962.

A life-long Southern Baptist, Clinton graduated from the Hot Springs public high school in 1964. He attended the Edmund A. Walsh School of Foreign Service at Georgetown University in Washington D.C., where he became active in Democratic politics and won prestigious Rhodes scholarship to Oxford University in England. He was a bit player in the anti-Vietnam war movement, and managed to stall the draft until he received a high lottery number, an evasion that became controversial in his first presidential campaign. He attended Yale Law School (JD 1973). A hail fellow well met, Clinton developed a vast network of friends. He met Hillary Clinton at Yale; they married in 1975 and had one daughter, Chelsea in 1980.

The Democratic Leadership Council (DLC) formed in early 1985 to formulate a moderate Democratic agenda. With Al From as executive director and Georgia Senator Sam Nunn as chairman, DLC comprised mostly Southern Democratic congressmen. They sought to rebuild the party's image after a series of defeats by Reagan and Bush. They wanted to assure voters that the moderate-conservative wing of the party was alive and well, and that its policy initiatives fit with mainstream American values. After the 1988 defeat, From asked Clinton in March 1990 to become the first DLC Chair from outside Washington. He and Clinton recruited state and local officials from around the country for the DLC, trying out some of the policy initiatives developed by the affiliated think tank the Progressive Policy Institute (PPI). Proposals that found their way into Clinton's 1992 platform included:

The two DLC manifestos and Clinton's 1991 "New Covenant" speech accounted for more than 60% of the promises in the 1992 Democratic platform. [2] Clinton campaigned as a "New Democrat," with an appeal to southerners and moderates that included demands for welfare reform and support for the death penalty.

After the surge of support for the war policy of President George H.W. Bush pushed his popularity to the 90% level, most prominent Democrats decided to wait out the 1992 election. Clinton, though little known outside Arkansas, proved the best campaigner in a weak field and won he Democratic nomination. Unexpectedly, billionaire Ross Perot entered the race (and briefly led the polls). Both Bush and Perot proved poor campaigners, as Clinton and his running mate Al Gore promised a more responsive government. Clinton won easily, and entered Washington with a Democratic Congress and a vague agenda.

Clinton's honeymoon with Congress abruptly ended when the issue of gay rights in the military exploded in his first days in office. During the campaign Clinton had quietly promised gays and lesbians that he would end their exclusion from the military. The public debate forced Clinton to accept the military's compromise, called "Don't ask, don't tell," which remains in effect in 2007, and allows homosexuals to serve but penalizes them if they are openly gay. However, by raising the issue Clinton did shift public opinion, which previously had been more hostile toward homosexuals.[3]

One of Clinton's favorite programs was AmeriCorps, modeled after the Peace Corps and the Civilian Conservation Corps. It sent 100,000 youth into paid public service jobs around the country. It was an expansion of a Bush program.

In 1993, Clinton called for a national medical care system that would incorporate the 15% of the population that was entitled to emergency care but lacked broader insurance. Clinton decided on a plan using regional insurance purchasing agencies along with modest tax subsidies to combine universal coverage with cost efficiency. He and his advisors believed the plan would be acceptable to big business and the larger insurance companies, but the plan was opposed by a well-financed campaign. Skocpol (1996) suggests the major mistake may have been in emphasizing the cost-reducing aspect of the plan, not realizing that Americans were willing to pay for a government program that would provide generous benefits to them. The fear that Clinton's proposals would lead to the sort of health care rationing prevalent in Canada and other countries further troubled the voters. Starr (1997) notes that Clinton sought to achieve liberal ends of universal coverage through the conservative means of managed competition among private health plans, with a backup cap on the rate of growth in average insurance premiums. This approach had a political as well as policy rationale. It was meant to be the basis of an alliance that could include conservative Democrats and moderate Republicans and thereby achieve the majorities necessary for congressional passage. But what we saw as compromise, they did not -- especially as the very locus of the political center shifted to the right during the debate. Health care reform that seemed "inevitable" to many serious observers at the start became unthinkable by the end. Polls showed strong initial support, but he never secured passage in either house of Congress and Republican victory in the 1994 elections doomed his plans.

Butfoy (2006) argues that in the 1990s the revolution in military affairs (RMA), which produced "smart" weapons like cruise missiles, came of age. This apparently transformed how America viewed the relationship between force and international relations. It looked as though technology was framing foreign policy. In particular, smart weapons enabled Clinton to combine risk minimization with an expanded security agenda. However, we should be wary of ascribing technological determinism to the conflicts of the 1990's dominated by Washington's flexing of its strategic superiority, such as its bombing of Belgrade. As shown by comparison with US strategy after the 11 September 2001 terrorist attacks, Washington's stance in the 1990's was shaped by linkages between technology and specific political circumstances. As these circumstances changed, so did the RMA's place in US efforts to shape world order.

Analysts have suggested many causes for the drastic change in political sentiment in the country between 1992 and 1994; among the causes suggested were voter disgust at Congressional scandals mainly implicating Democrats, voter distrust of Clinton after the presentation and defeat of the "Hillarycare" healthcare proposal, the nationalization of the election by Newt Gingrich's "Contract with America", and more skilled framing of issues by the Republicans in 1994.[4]

In the later part of Clinton's presidency, he was involved or accused for involvement in multiple scandals. The Republican Party launched many investigation on many of his illegal dealings. He was unsuccessfully impeaced.

Needham (2005) argues the "permanent campaign" is said to have reached its apogee in the incumbent communications strategies of Clinton and British Prime Minister Tony Blair. However, their assiduous courting of public opinion while in office has been used to explain both the high approval ratings of these leaders and their unpopularity for long periods of their incumbency. This apparent paradox suggests that the permanent campaign model is too blunt an instrument to usefully describe or evaluate incumbent communications. Its assumption of continuity between election campaigning and office-holding fails to explain how the strategic terrain changes once a challenger takes office. The concepts of branding and relationship marketing can be used to highlight the difference between gaining support in the one-off transaction of an election and retaining voter loyalty in a post-"purchase" setting. The success of Blair and Clinton in establishing a relationship with voters from within office can be assessed using six attributes of successful brands: simplicity, uniqueness, reassurance, aspiration, values, and credibility. As incumbents, facing challenges in shifting strategic and institutional environments, Blair and Clinton developed messages that were simple and appealed to voter aspirations. Voters remained skeptical about the extent to which these leaders embodied values and delivered on their promises.