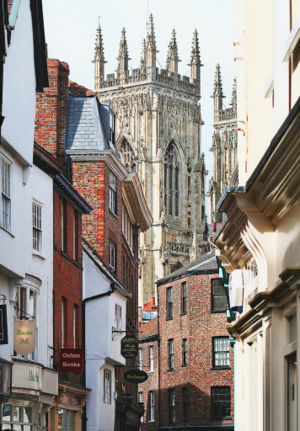 (CC) Photo: Paolo Margari
York Minster is the city's cathedral, an imposing presence above the narrow streets of the old centre.

York is a city in North Yorkshire, England, at the meeting point of the rivers Ouse and Foss. It stands close to the centre of Yorkshire, to which it lends its name. The closest major population centres are the city of Leeds and the coastal town of Scarborough, both of which enjoy a friendly rivalry with the city's native 'Yorkians'.

York did not form part of any of the three historic divisions of Yorkshire, known as ridings (East Riding, North Riding and West Riding). In addition, although the city is sometimes informally referred to as "old York", the American city of New York was not directly named after it; rather, New York got its name from a previous Duke of York.

Traditionally the term City of York was reserved for the area within the city walls (a small area outside of the walls, the Ainsty, was often associated with the City, resulting in the term the City and Ainsty of York), but the modern City of York, created on April 1, 1996, is much larger. It is a unitary authority, and apart from York itself, includes several neighbouring parishes which formerly belonged to the surrounding districts of Harrogate, Ryedale and Selby. It borders on the non-metropolitan counties of North Yorkshire and the East Riding of Yorkshire though for ceremonial purposes is part of North Yorkshire.

York is home to the University of York, founded in 1963, and York St John University, which was founded in 1841 and gained university status in 2006.

The city is the seat of the Archbishop of York, metropolitan bishop of the Province of York; this position is the second highest in the Church of England.

The name 'York' has an interesting etymological history, ultimately deriving from the Latin name for the city, Eboracum, which derived from the Brythonic ebor-acon meaning "place of yew trees". The name may have been derived from another Roman city in the Iberian peninsula called Ebora (current day Evora in Portugal). The city was founded in AD 71, and has a rich Roman and Viking history, acting as capital of the Roman province of Britannia Inferior. It later became the seat of the Archbishop of York, whose province of York covers northern England, and acted as the centre for the Viking kingdom of Jorvik. The city remained one of England's main cities throughout the middle ages, declining in relative importance only with the Industrial Revolution.

York's economic downturn during the Industrial Revolution meant that many medieval structures, elsewhere swept aside to make way for mills and factories, survived reasonably intact. The renewed interest in medievalism in the 19th century led to a widespread programme of renovation, and to this day the city attracts a great deal of tourism, the jewel in the crown being the city's historic cathedral church, York Minster.

York lies within the Vale of York, a flat area of arable land bordered by the Pennines, North York Moors and Wolds. The ings are flood meadows along the River Ouse, while the strays are scattered around the city in marshy, low-lying places.

During Roman times, the land surrounding the rivers Ouse and Foss was very marshy, making it easier to defend. The city is prone to severe flooding from the River Ouse, and has an extensive (but not always effective) network of flood defences. These include walls along the Ouse, and a barrier across the River Foss where it joins the Ouse.

The floods of late October and early November 2000, which were the highest for over 350 years, caused much damage, but the water did not breach the (sandbag reinforced) flood walls. Much land within the city has always been too flood-prone for development.

This is a chart of trend of regional gross value added of York at current basic prices.[2]

York's economy is based largely on tourism, science and service-based industries. This is very different from the position as recently as the 1950s, when York's prosperity was based on chocolate manufacturing and the railways. Most of the industry around the railway has gone, including the carriage works which once employed some 22,000 men. Major employers now include City of York Council, Norwich Union, Card Protection Plan and Nestlé, amongst others.

York is the headquarters of the confectionery manufacturer Nestlé Rowntree, and home to the KitKat, Smarties (though not for much longer) and eponymous Yorkie bar chocolate brands. Terry's chocolate factory, makers of the Chocolate Orange, was also located in the city; but it closed on 30 September 2005, when production was moved by its owners, Kraft Foods, to Poland. However, the historic factory building can still be seen, situated next to the Knavesmire racecourse.

It was announced on the 20 September 2006 that Nestlé would be cutting 645 jobs at the Rowntree's chocolate factory in York.[3] This came after a number of other job losses in the city at Norwich Union, British Sugar and Terry's chocolate factory.[4] Despite this, the employment situation in York remains fairly buoyant, with at least one major employer (NU) still employing more people in the city than it did five years ago.

In the 1990s UK local government reform, York became one of the many boroughs to regain unitary status, but was the only one to see a substantial alteration in its borders, taking in parts of Selby and Harrogate districts, and about half the population of Ryedale district. Unsurprisingly, this caused tension with its neighbours. Ironically, the new boundary had not been promoted by the council, which had proposed the area contained within the A64/A1237 ring road. The current boundary was imposed after central Government had rejected the council's proposal.

The City of York Council has 22 wards, which elect between 1 and 3 councillors each, for a total of 47 councillors. As a result of the 2007 local elections, no party has an absolute majority, resulting in no overall control. The Liberal Democrats have 19 councillors. There are 18 Labour Party councillors, 8 Conservative Party councillors and 2 Greens.[5]

The city has its own Magistrates' Court, and more unusually also a Crown Court and County Court. It is served by the North Yorkshire Police Service.

York is twinned with:

York also has several private schools. St Peter's School is famous as the school attended by Guy Fawkes. Two others have Quaker origins: Bootham School is co-educational and The Mount School is all-girls. On the outskirts of the city is Queen Margaret's School. 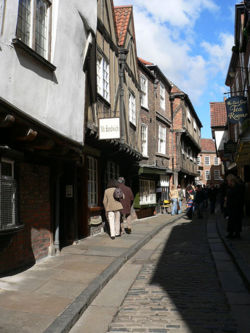 'The Shambles' in the old centre is a network of streets formed between lop-sided houses and leaning buildings.

York's centre is enclosed by medieval walls. The entire circuit (including parts where walls never existed) is about 3 miles.Clifford's Tower, a quatrefoil keep built on top of a Norman motte, was the site of a massacre of Jews in 1190.

The Shambles is a narrow medieval street, lined with shops, boutiques and tea rooms. Most of these premises were once butchers' shops, and the hooks from which carcasses were hung and the shelves on which meat was laid out can still be seen outside some of them. The street also contains the Shrine of Margaret Clitherow, although it is not located in the house where she lived.

Another feature of central York is the Snickelways, narrow pedestrian routes, many of which led towards the former main market-place. The city has many museums, including the Castle Museum, Yorkshire Museum & Gardens, JORVIK Viking Centre, the York Art Gallery, Richard III Museum and the Merchant Adventurers' Hall. The National Railway Museum is situated just beyond the station, and is home to a vast range of transport material and the largest collection of railway locomotives in the world, including the world's fastest steam locomotive LNER 4468 Mallard and the world famous 4472 Flying Scotsman, which runs regularly.

York is also a major venue for horse racing at York Racecourse in the Knavesmire area, and every year, thousands flock to the city for the Ebor Handicap Meeting in August.

York is also noted for its wealth of churches and pubs. Many of the remaining churches in York are from the medieval period. It is said that York contains one pub for every day of the year, and that there is no point within the city walls where one can stand and not be able to see at least one pub and at least one church, but these claims are exaggerated.

The City's football team is York City F.C. who play in the Nationwide Conference.

The most notable sportsmen to come form York in recent years are footballer Marco Gabbiadini and the current England manager Steve McClaren, who both attended Nunthorpe Grammar School.

Motorcycle speedway took place at York. The track in the Burnholme Estate was completed in 1930 and a demonstration event staged. In 1931 the track staged team and open events and the York team took part in the National Trophy.

York has two main theatres, the Theatre Royal and the Grand Opera House. It also has many amateur companies, and is home to the Riding Lights Theatre Company.

A former church, St Margaret's, Walmgate, is now the National Centre for Early Music, host to concerts, broadcasts, competitions and events through the year, especially during the York Early Music Festival.

Members of the Royal Family

The York area is served by a local newspaper, The Press (known as the Evening Press until April 2006) and two local radio stations Minster FM and BBC Radio York. It is also served by its own free-to-air television station broadcasting on frequency 54,York@54.

The University of York has its own television broadcasting channel York Student Television (YSTV) and two campus newspapers, the national award winning nouse and Vision. Its radio station URY was voted BBC Radio 1 Student Radio Station of the Year 2005.

Quaker involvement in the city

York has a long association with the Religious Society of Friends. The York-born Quaker chocolate entrepreneurs and social reformers Joseph Rowntree and Benjamin Seebohm Rowntree left an indelible mark on the city, through both their business interests and their philanthropy. They built the village of New Earswick to provide quality affordable housing for their employees. They also founded two Quaker schools, Bootham School and The Mount, and contributed in large part to the building of York Public Library and the creation of Rowntree Park. The four Rowntree Trusts, funded from the Rowntree legacies, are based in York.

The Retreat is a large Quaker mental hospital, situated in the east of the city outside the city walls. It was founded in 1796 by William Tuke; over the next century his son Henry Tuke, grandson Samuel Tuke and great-grandson Daniel Hack Tuke also devoted themselves to mental health reform, continuing to reform The Retreat and publishing a number of works on the subject. Another notable York Quaker was the sculptor Austin Wright.