Ghana is a state in West Africa, bordering the North Atlantic Ocean between Côte d’Ivoire, Burkina Faso, and Togo. On an area of more than 230,000 km², it has 18.5 million inhabitants (Census 2000).

In colonial times, the country was called the “Gold Coast”. The government of Kwame Nkrumah chose the name “Ghana” in 1957, the year of independence, referring with admiration to the ancient state of “Gana” in the area of today’s Mali.

The Ghanaian flag is a result of a competition, announced by a newspaper in 1957. Mrs. Theodosia Okoh, who won the competition, is the creator of the flag. She suggested red for those who died in the struggle for independence, gold for the wealth of the country and green for the forest. The black star in the centre is the symbol of African freedom. 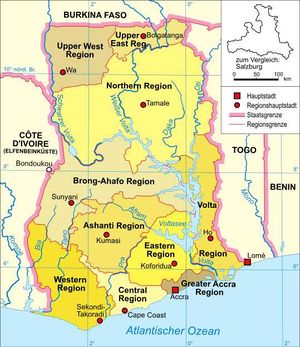 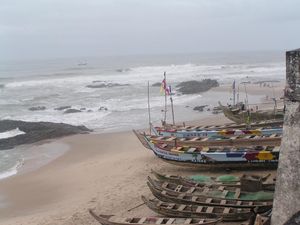 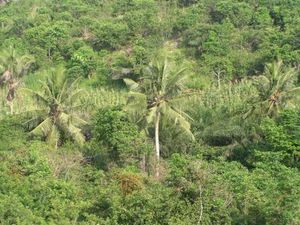 The Ghanaian Regions with their capital are:

Ghana is located on the Gulf of Guinea, slightly north of the equator, which just crosses Ghanaian waters, but not the land. The country had more than 500km of sandy beach. The climate is tropical. In the southern parts, there are rain forest belts. In the north, there is savannah.

In January, a sandy wind goes across the whole country, the “Harmattan”.

Along the coast, farmers have one harvest a year. Only fifty kilometres northward, a fertile belt begins with two harvests a year. The northern regions with their dry climate are not as fertile as the southern zones.

The Akan people forms the biggest part of the Ghanaian population with a share of about 50%. Other major groups are the Mole-Dagomba, Ewe (a people living in Ghana and Togo) and Ga-Dangme.

Anton Wilhelm Amo (c. 1703 – after 1753) had studied philosophy in Germany. He has published several books and treatises. Politics [edit]

Ghanaian Literature does not have a long tradition. One of the first authors was the first president of Ghana, Kwame Nkrumah. His best known book is his autobiography, "Black Star".

Other authors with international acknowledgment are:

Fufu, a mixture of boiled plantain and cassava, pounded together and served with a soup is a popular dish.

Christian religion is prevailing (69%), followed by Muslims (15.6%) and Natural religions (8.5%). Most of the Muslim population is to be found in the north. Ghanaians are very tolerant, so that in official ceremonies, representatives of all three main beliefs hold a short service. Traditional religion plays a much bigger role than the statistics make believe. Lots of Christians and Muslims pour libations for their ancestors.

The ancient Akan religion is monotheistic; their God is called “Nyame”. This word is also used for the Christian and the Muslim God. The Akan believe that nature is animated by certain spirits. These spirits are living in trees, in the water or in other places they may find comfortable. The spirits can be located. In this case, if it is a tree, for example, a stone ring is built around the residence of the spirit, who receives libations and food sacrifices from time to time. If the tree has to be cut, the spirit must be asked before to move to another tree.

The veneration of the ancestors plays an important role. They are living in a world between the human world and God and they are able to mediate. The ancestors also receive sacrifices.

As written sources are scarce, it is very difficult to write about older Ghanaian History. We have excellent sources from Arab writers about the ancient empires of (ancient) Gana, Songhai and (ancient) Mali, situated on today’s territory of Mali, Mauritania and Senegal. Those empires were incredibly rich and had a very rich culture.

Many of the Ghanaian peoples claim to be descended from the peoples who formed those ancient empires. This theory is not proved. Other theories say, the inhabitants of modern Ghana came from old Egypt. This is also but a vague theory.

Arab sources do not give any hint to the origin of Akan, Ewe and others. What happened on Ghanaian territory during that early time cannot be reconstructed. There is still a lot to do for archaeologists.

There were several migration movements from north to south throughout the centuries. The intruders did not come into unsettled land. When the Europeans arrived, there were battles and dissension between the indigenous inhabitants.

As a result of the activities of the Portuguese king Henry the Navigator (1394-1560), a Portuguese expedition arrived on the Gold Coast in 1471. There aim was to find trade partners. In 1482, the Portuguese castle “Elmina” (The mine) was built. It is possible, that Christopher Columbus spent some time there in 1492 on his famous expedition. Very fast, the colonial powers turned to slave trade. In 1502, the first slave ship left the West African coast. The European traders bought most of the slaves from indigenous peoples.

During the centuries, the colonial powers changed. Sometimes, the territory was divided, then all of the country was in one hand. The different colonial powers were mainly Portuguese, Dutch and English. There were also Danish, German and other influences.

By the 1900s Ghana belonged to the British Empire, which called the territory the Gold Coast.

After a lengthy transition period, Ghana gained independence in 1957, becoming the first sub-Saharan country to end colonial rule. The first president of the young republic was Kwame Nkrumah. Nkrumah entered office with widespread popularity and high expectations. In 1958 he held a conference in Accra that attracted hundreds of African leaders from around the continent. Nkrumah become an outspoken supporter of Pan-Africanism, an ideology that favored a unified African state. However, Nkrumah's economic policies, increasingly repressive measures against political opposition, and expansion of state control eroded his support, and in 1966 he was overthrown in a military coup led by General Joseph Ankrah. The army returned control of Ghana to civilian politicians after several years, but intervened several more times in the ensuing years. Eventually a low-ranking officer, Flight Lieutenant Jerry Rawlings, seized control of the government in 1982. Rawlings instituted economic reforms, and also introduced elections. After serving two terms as president (in addition to his rule before the democratic reforms), Rawlings stepped down in accordance with the Constitution. He was succeeded by John Kufuor. John Atta Mills, a member of the opposition, won elections in 2008 that were marked by relative calm and the peaceful transfer of power from one party to another.

The country has a solid democracy and is very peaceful. Representatives of the government are often asked to mediate in other countries. Former United Nations Secretary-General Kofi Annan is a native of Ghana.