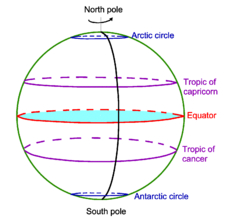 In 1980 the Earth's equatorial radius was fixed to a reference value nearest to the meter (6 378 137 m) by the International Union of Geodesy and Geophysics.[1] This gives the equatorial length equal to 40 075 017 m ≈ 40 075 km. The linear velocity (with respect to an inertial system fixed to the Sun) of a point on Earth, resulting from the diurnal rotation with its angular period of 23h 56 min,[1] is highest on the equator and is there about 40075/23.934 ≈ 1674 km/h. Obviously, the linear velocity decreases going north or south and is zero on both poles.[2]

Under the assumption that the Earth is a perfect sphere, the length of a degree of latitude and longitude give the (same) length of the equator. Measurements of the length of a longitudinal (east-west) arc became possible only around 1900 after the invention of radio telegraphy, but measurements of the length of a latitudinal (north-south) arc were already possible in antiquity and made by Eratosthenos as early as 240 BC. The first measurements of deviations from perfect sphericity were made by two French expeditions in the late 1730s, one to the arctic circle in Lapland and one to the equator in the Quito region of present-day Ecuador. Scientific members of the first expedition were Pierre Louis Maupertuis, Alexis Claude Clairaut, and Pierre Charles Le Monnier, while Louis Godin, Pierre Bouguer, and Charles Marie de La Condamine were prominent members of the southbound expedition. Earlier the distance of arc had already been determined accurately inside France. Comparison of the data showed clearly that the Earth is an oblate ellipsoid, flattened at the poles and bulging at the equator.

An important circle on the Northern hemisphere (not a great circle) is the Tropic of Capricorn. This is the latitude where the Sun seems exactly overhead once a year—at the summer solstice (around June 21). In 2010 it was at 23º 26′ 17″ north of the equator (the Earth axis "wobbles" somewhat due to external torques so that the latitude of the tropic varies a little in time). The Arctic circle is the polar circle at latitude 90°−23º 26′ 17″ ≈ 66° 34′. It is the northern most latitude on Earth that just sees the sun for a very brief period above the horizon at the winter solstice (around December 22). On the Southern hemisphere these circles are called the Tropic of Capricorn and the Antarctic circle, respectively.

The area around the equator bounded by the Tropic of Cancer and the Tropic of Capricorn, sees the Sun exactly overhead (at 90°) twice a year and at other times under an angle that deviates at most 46° from overhead position. Hence this area on Earth receives a large amount of solar energy all year round and is consequently on average the hottest region on Earth. This region (the "Tropics") hardly experiences any seasons.