Moment of a force

From Citizendium
(Redirected from Torque)
Jump to: navigation, search

The moment of a force, sometimes called torque by engineers, quantifies the ability of a force to generate rotational motion about an axis. The moment of a force can be calculated by multiplying the length of the line between the axis of rotation and the point of application of the force by the component of the force which is perpendicular to that line. In vector notation this is written, using the vector product, as:

where M is the moment of the force, r is the displacement vector from the axis of rotation to the point of application of the force and F is the force vector.

Since the moment of a force consists of the product between a distance and a force the SI units for moments are newton meter (Nm). These are dimensionally the same as the units for work done, joule (J), which is also formed from the multiplication of a force with a distance. However, being two distinct and separate physical concepts the units are always written as newton meter and never as joule.

Equivalence of a force to a displaced force and couple 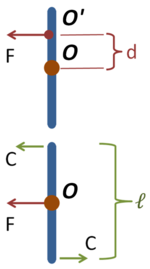 Any couple can be replaced by another in the same plane of the same direction and moment, having any desired force or any desired arm.[1]