The Conservative Party, officially the Conservative and Unionist Party,[1] since the fusion of Conservatives and Liberal Unionists in 1912, informally the Tory Party, has been the governing political party in the Parliament of the United Kingdom since May 2010, although until 2015 it was in coalition with the Liberal Democrats. Historically, it has been the party of the right, both socially and economically, favouring business and established social institutions. The leader of the party was Theresa May from 11th July 2016 to 7th June 2019, when she resigned, triggering a leadership election. The party is now led by Boris Johnson.

(CC) Photo: Jay Galvin
Margaret Thatcher in September 1990. By this point she had been Prime Minister for eleven years.

Before the election of the New Labour Party government, Britain had eighteen years of Conservative government, starting with the 1979 election of Margaret Thatcher, and then John Major. Thatcher represented a major shift towards free market ideology, as well as the first and only woman Prime Minister Britain has seen, privatizing a number of national industries: British Telecom, British Gas, British Airways, British Leyland and British Steel. Her 1989 introduction of the Community Charge or 'poll tax' was extremely unpopular - the tax system it replaced was based on property value, while Community Charge was a flat rate on each adult.

Following Thatcher, John Major was elected. He replaced the unpopular Community Charge with Council Tax, collaborated with George H. W. Bush on the first Gulf War, and stewarded the economy well. His government was beset by sleaze and scandal: after announcing a 'Back to Basics' campaign in 1993 which many saw as being moralist and based on 'family values', a string of sexual scandals emerged. David Mellor's extra-marital affair with actress Antonia de Sacha hit the headlines, as did Alan Amos, Tim Yeo and others. The 'Cash for Questions' scandal also emerged, with various Conservative MPs being paid by businessman Mohammed Al Fayed to ask questions in the House of Commons.

(CC) Photo: John Puddephatt
William Hague led the Conservative Party from 1997 until 2001; he later became Foreign Secretary and Leader of the House of Commons.

The Major government lost by a landslide to Tony Blair's Labour Party in May 1997, and the Tories elected William Hague, previously the Secretary of State for Wales and well-known for a speech at a Conservative Party conference as a teenager in the 1970s. Hague endured a rough ride in the press and had to contend with a public broadly unwilling to see the swift return of the Conservative Party to power. With only 164 seats in Parliament, the party struggled to make its voice heard against the overwhelming majority of the first Labour government. In the 2001 general election, Hague gained just two seats and quickly resigned; his most notable achievements were presiding over some increase in party membership and reforming the leadership election system. The first time this system was used, in which MPs nominate two candidates for the membership to choose between, they elected Iain Duncan Smith, a relatively inexperienced leader who was ousted in 2003. His replacement, Michael Howard, was nominated unopposed, and David Cameron was elected following another election defeat in 2005, beating David Davis into second place. 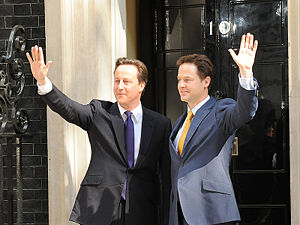 The Conservatives failed to win a working majority in the 2010 UK general election, but were able to establish a formal coalition with the Liberal Democrats, the third-placed party in Parliament. Amongst the stated aims of the coalition in its earliest days were measures to deal with the effects of recession and the cancellation of identity cards for UK citizens on civil liberties and cost grounds. 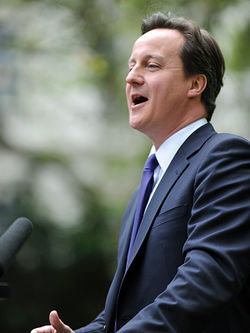 Cameron was a Blair-like party moderniser who has mixed the traditional right-wing values of the Conservatives with claims to better support social justice and the environment.