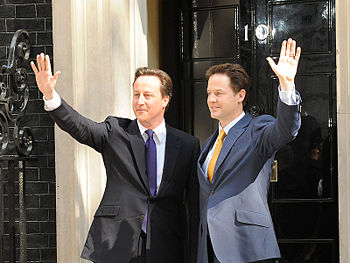 (CC) Photo: Prime Minister's Office
The 2010 general election ultimately resulted in a coalition government led by David Cameron (left) and Nick Clegg; this picture was taken shortly after they took office as Prime Minister and Deputy in May 2010.

A general election to select Members of Parliament in the House of Commons of the United Kingdom (UK) took place on 6th May 2010, resulting in a hung parliament - i.e. no party won a majority of seats. This led to the formation of a coalition government. The governing Labour Party under Prime Minister Gordon Brown failed to defend its win in the 2005 general election against the Opposition party, the Conservatives, led by David Cameron, the Leader of the Opposition. The Conservatives won most votes and most seats but lacked the support to immediately enter government; a surge in support for the Liberal Democrats failed to materialise, though their share of the vote improved slightly; the party later formed a governing coalition with the Conservatives.

The three main national parties contested 649 seats (see below) using the first past the post voting system alongside smaller parties, including those fielding candidates only in particular regions, such as the Scottish National Party in Scotland. Northern Ireland, being part of the UK, also elects MPs, but these parties do not contest seats in Great Britain and are unchallenged by or stand under electoral pacts with parties in the rest of the UK.

While a general election usually involves all constituencies, the vote in one seat was delayed until 27th May due to the death of a candidate.[1] This meant that the general election would involve 649 seats rather than 650.

The campaign was notable for the introduction of American-style leaders' debates, in which the three main party leaders - Gordon Brown, David Cameron and Nick Clegg - faced audiences and attempted to put across their positions. The first debate saw a significant shift towards the Liberal Democrats in the opinion polls conducted around that time,[2] though not so much later; no participant was declared the outright victor in the media.[3]

Another issue which occurred as the final week of the campaign opened involved Prime Minister Gordon Brown privately referring to a member of the public as a "bigot" and discussing a member of his staff regarding this encounter; the Labour leader was caught on tape making the comments after a microphone was left on.[4]

The vote was marred by several incidents in which thousands of voters were turned away from polling stations as long queues formed or administrative problems delayed proceedings. Turnout was higher than predicted; in some areas, voters were locked out amid angry scenes and talk of legal challenges (see videos). Re-runs of the elections in some seats were thought possible, but did not occur.[5]

Former United Kingdom Independence Party leader Nigel Farage was seriously injured in a light aircraft crash while campaigning in Northamptonshire after a banner being flown from the plane became entangled in the tailplane.[6]

Following the close of voting, the Conservatives quickly emerged ahead both in the popular vote and in the number of seats, but polls and early results indicated that the likely outcome was a hung parliament. As the night wore on, it became clear that the surge in support for the Liberal Democrats had failed to translate into parliamentary gains. Nor did senior ministers lose their seats: the biggest government-related casualties included a handful of junior and former ministers, including Jacqui Smith, the former Labour Home Secretary, who had resigned following an expenses scandal, and Charles Clarke, also a former Home Secretary. On the other hand, Hazel Blears, a former minister who had also been embroiled in an expenses controversy, held her seat.

Labour's vote improved in Scotland (where no seats changed hands over the 2005 result), while the Conservatives achieved a majority in English constituencies. A majority of Welsh seats remained in Labour hands, but overall the party made a loss. In Northern Ireland, the leader of the Democratic Unionist Party and First Minister of the Northern Ireland Executive, Peter Robinson, lost his seat to the Alliance Party, which won representation in parliament for the very first time. Robinson had served as an MP since 1979.

The Green Party of England and Wales won their first ever seat in parliament after many years of trying. Independent candidates lost their seats, including Health Concern. An increase in support for smaller parties and independent candidates - predicted following a parliamentary expenses scandal that tarnished all three main parties - did not really occur.

The far-right British National Party failed to win any seats, and indeed Labour saw an increased majority in the seat contested by the BNP leader. The Conservative Party welcomed several new politicians from ethnic minority backgrounds, including its first black female MP.[7]

By 6am, no clear result was evident after eight hours of counting, in contrast to earlier general elections in which the outcome was clear by that time. The overall national picture failed to reflect many unexpected victories and defeats at local level.[8] By 9:40am, Britain officially had a hung parliament.

Prime Minister Gordon Brown signalled his willingness to work with the Liberal Democrats.[9] An hour or so later, Conservative leader David Cameron made a public offer to the Liberal Democrats on the afternoon following the election, in the hope of forming a minority government with the support of the third national party. One of the main divisions between the two parties being reform of the voting system, the immediate media reaction pointed to the unlikelihood of such a union succeeding;[10] this was proven wrong a few days later, when the two parties agreed to form a coalition.

The overall national results of the 2010 UK general election after 648 of 649 seats were declared are as follows:[11]

The Conservatives won a firm majority in England, but this did not allow them to claim victory in the country as a whole due to a stronger showing by other parties elsewhere in the UK. Results exclude one seat won by the Speaker and one left temporarily vacant due to the death of a candidate.

Scotland saw no Westminster seats change hands in this election.

Labour retained a majority of Westminster seats within Wales, but the Conservatives and the nationalist Plaid Cymru ('Party of Wales') made gains.

Northern Ireland has its own political parties, some of which vote with those of England, Scotland and Wales in electoral pacts - for example, the SDLP works with Labour in the House of Commons. The most significant news was the Alliance Party winning its first ever seat by defeating the First Minister of the Northern Irish Executive, Peter Robinson.