Yorkshire is a large county in northern England and the United Kingdom. It is distinguished from others on cultural rather than political grounds; the English people who live there share something of a common history, some commonalities in their dialects, and according to popular lore, similar ways of thinking, especially where money and 'plain speaking' are concerned.

Yorkshire today comprises four political counties: three are straightforwardly named North Yorkshire, West Yorkshire and South Yorkshire, the exception being the East Riding of Yorkshire. One stereotype of Yorkshire people being that they rarely use unnecessarily elaborate language, the eastern county is often informally referred to as the 'East Riding' or 'East Yorkshire'. The four counties have never respected Yorkshire's historical boundaries; for example, it was not until 1996 that the East Riding was formed from the northern remains of the short-lived Humberside county.[1] Likewise, the southern part of Cleveland lays claim to Yorkshire roots, but is politically placed outside Yorkshire's northern fringes. 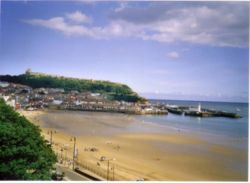 Yorkshire is home to several large cities which developed through coal mining and heavy industry. While the landlocked western and southern counties saw growth through manufacturing and inland areas supported farming, those bordering the North Sea benefited from tourism. The east coast includes several famous resorts, of which Scarborough (a former spa town) and Whitby are best-known, the latter for its association with Dracula.

Historically, Yorkshire once included the Roman capital, Eboracum, today the city of York. More recently, it was home to the Brontë family of writers, who lived in the village of Haworth.

Nowadays, Yorkshire is a significant economy within the United Kingdom, with the city of Leeds emerging as a strong business centre and other cities under significant redevelopment. Its coasts and wilder regions, such as the Yorkshire Dales, are regarded as areas of outstanding natural beauty, drawing millions every year to hike the hills and walk the beaches - weather permitting, of course.