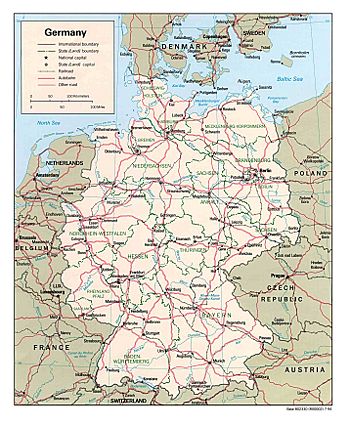 Germany (German: Deutschland), officially the Federal Republic of Germany (German: Bundesrepublik Deutschland), is a country in north-western continental Europe that is a major political and economic world player. With a population of 82 million persons today, the region that the modern Federal Republic of Germany (Bundesrepublik Deutschland) now covers has historically been a cultural crossroads, particularly in literature, philosophy and music, and later in science, mathematics and technology. Its standard language, 'High' German, remains a lingua franca in much of Europe, and its speakers represent their nation as full participants in such international arenas as the United Nations, the European Union, NATO and the G8. As well as having the highest population in Europe, Germany is the third largest economy in the world by GDP and the biggest in Europe.

Germany reached its current form in 1990, when West Germany and its Soviet-controlled neighbour East Germany were reunited, and Berlin again became the capital. The two parts had been divided since 1945 by the Cold War. The metaphorical Iron Curtain and the very real Berlin Wall were separators of East and West Germany, and indeed of Western nations and satellites of the Soviet Union. As a republic, Germany was formed from the German Empire following its defeat in World War I, but the new Weimar Republic crumbled amid economic instability, allowing the rise of the Nazis. Defeat in World War II was followed by the east-west split.

Germany, lying in central Europe, in its current form occupies an area between the North Sea and the Baltic Sea in the north, and the Alps in the south. Its direct neighbors are Denmark in the north, Poland and the Czech Republic in the east, Austria and Switzerland in the south, and France, Luxembourg, Belgium and the Netherlands in the west.

Germany is divided into sixteen states (German: Bundesländer) as shown in the map below. The capital cities of the sixteen states are listed in the table adjacent to the map. 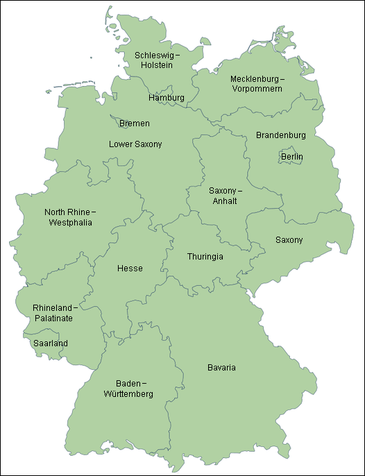 Today, German is a democratic and federal republic, meaning that its 16 constituent states can exercise devolved power, and their representatives form the upper chamber of parliament; as in other bicameral systems, this Bundesrat is not as powerful as the Bundestag, the directly elected lower house. The upper house is appointed by elected state governments. Angela Merkel (1954) since Sept. 2005 has been the Chancellor (Kanzler or head of government), who holds power in a grand coalition of the two largest parties. Except in time of war the Minister of Defence heads the armed forces. The President exercises only ceremonial duties; limited powers invested in the position can mostly be overruled by parliament. Presidents are currently elected by an assembly of Bundestag members and state representatives. Horst Köhler (1943- ) was elected President in 2004.

The average age at marrying (for the first time) for men was 32 and for women 29. Abortions are officially illegal, according to a 1995 law. However, prosecutions are not brought if they are performed in the first three months of pregnancy after consultation with a doctor. The annual abortion rate, at under ten per 1,000 women aged 15–44, is among the lowest in the world

Germany had a Net Reproduction Rate (NRR) of 0.66 in 1999. A rate of NRR=1.0 equals a constant population. Therefore, in terms of births and deaths (and not counting immigration) the population is shrinking by 34% between generations.[3]

Life expectance of females at birth in West Germany rose from 71 years in 1954 to 80 years in 2000; the expectancy for boys rose from 66 to 75. Expectancy in the eastern zone was about three years less.