Poland (Polish: Polska), officially the Republic of Poland (Polish: Rzeczpospolita Polska), is a large Slavic nation in Central Europe. Its history stretches 1000 years, with interruptions when it was controlled or even divided up by powerful neighbors. It is a member of the European Union and NATO. 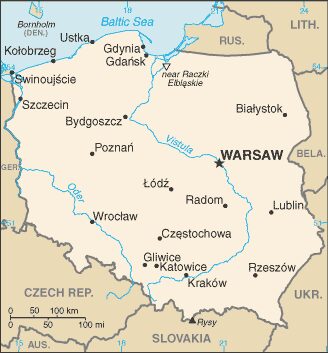 Poland is located in Central Europe and occupies a total area of 312,679 square kilometers. It is bordered by Belarus, the Czech Republic, Germany, Lithuania, a Russian exclave Kaliningrad Oblast, Slovakia, and Ukraine. Poland is predominantly open plains, with the natural borders of the Carpathian Mountains to the south and the Baltic Sea to the north.

Religion was a mainstay of Polish identity for a thousand years. It was a refuge from Communist rule, and before that an act of defiance against Prussians and Russians. As the rest of Europe secularized in the late 20th century, the Catholic faith grew stronger in Poland, symbolized by the selection of Karol Cardinal Wojtyła, Archbishop of Kraków, as Pope John Paul II in 1978. By the late 1980s, a third of all priests ordained in Europe were from Poland.[2]