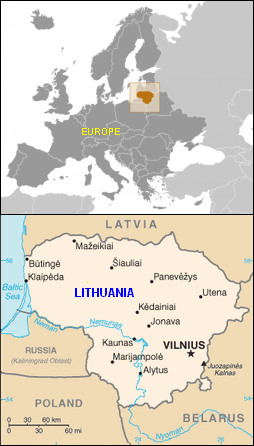 (PD) Map: CIA World Factbook
Map of Lithuania and its location in Europe

Lithuania (Lithuanian: Lietuva), officially the Republic of Lithuania, is a country in northern Europe. It shares borders with Latvia to the north, Belarus to the southeast, Poland, and the Russian exclave of the Kaliningrad Oblast to the southwest, and is situated along the south-eastern shore of the Baltic Sea. Its capital and largest city is Vilnius.

After World War I, Lithuania's Act of Independence was signed on 16 February 1918, declaring the re-establishment of a sovereign state. However, in 1940, Lithuania was occupied first by the Soviet Union and then by Nazi Germany. As World War II neared its end in 1944 and the Nazis retreated, the Soviet Union reoccupied Lithuania. On 11 March 1990, Lithuania became the first Soviet republic to declare independence from the USSR.

Lithuania has been a member state of the European Union since May 1 2004 and a member of NATO since March 29 2004.