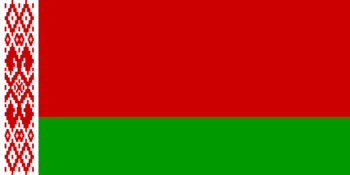 Belarus—formerly in English Byelorussia, Belorussia, White Russia—(Belarussian: Беларусь, Biełaruś;[1] Russian: officially Беларусь, Belarus, or usually Белоруссия, Belorussiya) is a landlocked country in Eastern Europe that borders Russia to the east, Ukraine to the south, Poland to the west, and Lithuania and Latvia to the north. Its capital is Minsk, and other major cities include Brest, Grodno, Gomel, Mogilev, Vitebsk and Bobruisk. Forty percent of the country is forested, and its strongest economic sectors are agriculture and manufacturing.

Until the 20th century, the Belarusians lacked the opportunity to create a distinctive national identity, since the lands of modern-day Belarus belonged to several countries, including the Duchy of Polatsk, Grand Duchy of Lithuania, the Polish-Lithuanian Commonwealth, and the Russian Empire. After the short-lived Belarusian People's Republic (1918–19), Belarus became a constituent republic of the Soviet Union, the Byelorussian SSR.

The final unification of Belarusian lands within its modern borders took place in 1939, when the ethnically Belarusian lands (though with a very substantial Polish population) that were part of interwar Poland were annexed by the USSR and attached to the Soviet Belarus. The territory and its nation were devastated in World War II, during which Belarus lost about a third of its population and more than half of its economic resources. The republic recovered in the post-war years. The parliament of the republic declared the sovereignty of Belarus on July 27, 1990, and following the collapse of the Soviet Union, Belarus declared independence on August 25, 1991. Alexander Lukashenko has been the country's president since 1994. During his presidency, Lukashenko has implemented Soviet-era policies, such as state ownership of the economy, despite objections from Western governments.

Most of Belarus's population of 9.85 million reside in the urban areas surrounding Minsk and other oblast (regional) capitals. More than 80% of the population are native Belarusians, with sizable minorities of Russians, Ukrainians and Poles. Since a referendum in 1995, the country has had two official languages: Belarusian and Russian. The Constitution of Belarus does not declare an official religion, although the primary religion in the country is Russian Orthodox Christianity.