From Citizendium
(Redirected from Vitebsk)
Jump to navigation Jump to search

Panorama of Vitebsk from 1912. 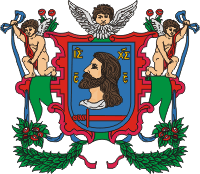 Coat of Arms of Vitebsk.

Viciebsk or Vitebsk—also written Vitsyebsk—(Belarussian: Віцебск, Viciebsk[1] ['vʲitsʲepsk]; Russian: Ви́тебск, Vitebsk), is a city in Belarus, near the border with Russia and Latvia. The capital of the Vitebsk Oblast, in 2004 it had 342,381 inhabitants, making it the country's fourth largest city.

Vitebsk developed from a river harbor where the Vitba River (Віцьба, from which it derives its name) flows into the larger Dvina, which is spanned in the city by the Kirov Bridge. Its official founding year is 974, based on an anachronistic legend that it was founded by Olga of Kiev, but the first mention in historical record is in 1021, when Yaroslav the Wise of Kiev gave it to Bryachislav Ezyaslavovitch, Duke of Polotsk. In the 12th and 13th centuries Vitebsk was the seat of a minor principality, which thrived on the crossroads of the river routes between the Baltic, Black and Mediterranean seas. In 1320 the city was incorporated into the Grand Duchy of Lithuania; in 1569 it became a part of the Polish-Lithuanian Commonwealth. In 1597 Vitebsk was granted the Magdeburg Rights. In 1772 it was taken over by Russia in the First Partition of Poland.

Under Imperial Russia the ancient center of Vitebsk was rebuilt in the Neoclassical style. The town was a significant shtetl in the Pale of Settlement, with around half its population Orthodox Jewish at the turn of the 20th century. The most famous of its Jewish natives was the painter Marc Chagall. In January 1991, Vitebsk celebrated the first Marc Chagall Festival. In June 1992, a monument to Chagall was erected on his native Pokrovskaja street and a memorial inscription placed on the wall of his house. In the years 1919–1991 Vitebsk was part of the Soviet Union. During World War II, the city was under German occupation (1941-44). Up to 150,000 Jewish people were murdered during this time. Much of the old city was destroyed in the ensuing battles between the Nazis and the Red Army.

Early 12th-century Annunciation Church was rebuilt and covered with white plaster in 1992. Since 1992, Vitebsk has been hosting the annual Slavianski Bazaar in Vitebsk, an international art festival. Its main program is devoted to Slavic music. The main participants are artists from Russia, Belarus and Ukraine, with guests from many other countries, both Slavic and non-Slavic.