(CC [1]) Photo: Robert Rongen
Malbork Castle was built from brick because suitable building stone was not available nearby.

Malbork Castle on the banks of the River Nogat in Poland was founded in the 13th century by the Order of Teutonic Knights.[1] In 1283 the State of the Teutonic Order was established and from 1309 Malbork Castle was the headquarters of the Order. Occupying an area of 52 acres it is the largest brick-built castle in the world. Called Marienburg in the German language, the castle was named after the Virgin Mary. The castle was mostly complete by the 15th century.

In 1410, Polish and Lithuanian armies combined to besiege Malbork Castle for two months though they were unsuccessful in wresting control from the Knights. In the end the Polish gained control of the castle not through force, but by purchasing it from an economically weakened Teutonic Order in 1457. The Order's headquarters were moved from Malbork to Königsberg. Malbork Castle was badly damaged in 1945 by an explosion but has since been repaired. It is now protected as a World Heritage Site.

The Order of the Teutonic Knights was created by German knights who accompanied Frederick Barbarossa on the Third Crusade. The army disbanded after Barbarossa drowned. The Order was given papal recognition by Innocent III in 1199.[2] Though founded to protect Christians in the Near East, the Order turned its attention to eastern Europe and in 1226 attacked the pagan Prussians of eastern Europe near the Baltic Sea. The intention was to convert the Prussians to Christianity and protect the lands of the Christian Polish princes. The Order became so powerful that in 1283 the State of the Teutonic Knights was inaugurated.[3] 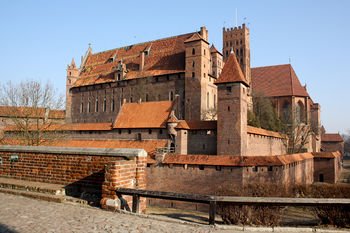 (CC [2]) Photo: Mats Skölving
The Upper Castle (seen here from the south) was the first part of Malbork Castle to be built.

In the 1260s the Teutonic Knights were struggling to deal with a revolt. The Order had tried to secure their rule by building castles and establishing colonies, but many were attacked and captured, even the fortress of Marienwerder capitulated. The situation was so dire that Pope Urban IV diverted a crusade to the Baltic which he had originally intended to be sent against the Mongols. After Christian rule was reasserted the Teutonic Knights began reinforcing their key castles: Königsberg was rebuilt in stone, and Marienwerder in brick. It was in this context that the construction of Malbork Castle began in 1274. Emphasising the religious aspect of the castle's owners, it was named the Marienburg meaning "Mary's castle". Many castles built by the Teutonic Knights were named after the Virgin Mary, such as the Marienwerder and Marienburg.[4] This first building stage last until about 1300; at this point Malbork Castle consisted of what is now called the "Upper Castle" with an outer enclosure.[5]

The fall of Acre in 1291 meant that the Teutonic Knights no longer had to defend the Holy Land, so could concentrate their resources on the Batlic. When it became clear that the church would not call a crusade to recover the Holy Land, the Order's headquarters were moved from Venice (which would have been the disembarkation point for travel to the Near East) and established at Malbork in September 1309. At the time there were suggestions that all military orders should be dissolved. King Philip IV of France was a particularly strong proponent of this view and persecuted the Knights Templar within France. Malbork was chosen as the headquarters of the Teutonic Knights partly because it was beyond Philip's reach.[6] While the Order's Grand Master, Siegfried von Feuchtwangen was resident at Malbork Castle he undertook a programme of expansion, and the outer enclosure was redeveloped into the "Middle Castle". In the 1330s and 1340s work began on the "Outer Castle" and construction lasted for much of the 14th century.[7]

War with Poland and Lithuania 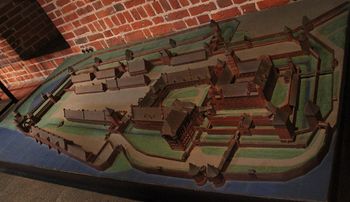 (CC [3]) Photo: Jeroen Fossaert
A museum model of Malbork Castle. In the early 15th century the castle was more than twice the size of the adjacent town.[8]

Once the Prussians were subjugated, the Teutonic Knights focussed their efforts on conquering pagan Lithuania. At the peak of their power, the Teutonic knights controlled about 120 castles and the Order's castles in Prussia formed the densest concentration of military buildings in all of Europe.[9] In 1386 the Grand Duke of Lithuania converted to Christianity.[10] This did not lead to peace with the Teutonic Knights, however, as the Order claimed the conversion was false. An alliance was brokered between Lithuania and Poland.[11]

News of the Grand Master's death spread quickly, and Heinrich von Plauen who led the garrison of Schwetz Castle took his troops to Malbork and assumed command of the castle on 18 July. Soldiers stationed at nearby castles flocked to Malbork to defend the castle at von Plauen's request. Their numbered were swelled by 1,500 survivors from the battle. Stocks of food meant the garrison could withstand a siege. As part of the preparation for the oncoming siege von Plauen ordered the residents of the town of Malbork to leave their home and then set fire to the buildings. The idea was to remove structures which would give the besiegers cover.[13] 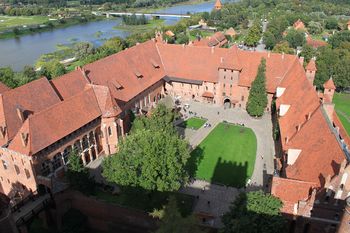 (CC [4]) Photo: Jeroen Fossaert
The Middle Castle and its courtyard seen from the Upper Castle

The Polish and Lithuanian armies marched slowly towards Malbork and arrived outside the castle walls on 25th July, ten days after the battle of Tannenberg. The slow progress had allowed the garrison at Malbork to prepare itself for the oncoming onslaught. A swathe of castles belonging to the Teutonic Knights had surrendered as the 27,000-strong army approached, and the leaders of the alliance thought Malbork's garrison would similarly be intimidated into submission. The first fighting took place on the evening of 26th July as the garrison attempted to defend the town walls, but they were pushed back by overwhelming numbers. The alliance thought this might mean the defenders would surrender, but one this proved not to be the case, the Polish and Lithuanian soldiers prepared themselves for the siege of Malbork Castle.[14] Cannon were set up to pound the castle walls. The Teutonic Knights taking refuge in the castle sallied out in an attempt to destroy the cannon but were repulsed.[15]

In August von Plauen met with the Polish king, Władysław, to discuss a truce but talks did not result in an agreement between the two parties. As the siege dragged on, tensions grew between the Polish and Lithuanian armies and matters were exacerbated by an outbreak of dysentery. Though under siege, the Teutonic Knights were able to send out messengers to seek reinforcements from their allies, and rumours of armies from Hungary and Bohemia coming to aid the Order further dispirited the besiegers. The siege was lifted on 19th September after nearly two months and the Polish and Lithuanian armies retreated. In recognition of his role in Malbork's defence, Heinrich von Plauen was elected to the position of Grand Master. Though Malbork held out, the outcome of the campaign was a severe weakening of the Order.[16] Hostilities dragged onto into the mid-15th century, but the previously wealthy Teutonic Knights gradually fell into financial crisis. In 1457 they offered to sell some of their fortifications to Poland, and Malbork Castle was swiftly purchased.[17][18] 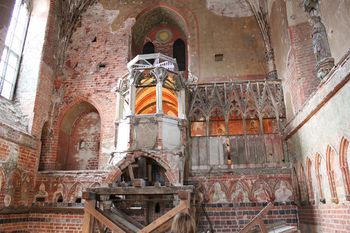 From the 19th century there was a growing interest in Malbork Castle as a historic monument. The buildings were restored at the behest of the King of Prussia. During the Second World War the castle was used by the military to store ammunition. In 1945, months before the war ended, the store exploded, badly damaging the castle, in particular the church and chapel. Since then however there have been constant efforts to restore and preserve Malbork Castle. Castles can evoke a variety of responses from people. In Ireland, where they were built by Norman invaders, castles are seen as a tool of oppression whereas in England they are considered part and parcel of the country's culture. As part of modern day Poland, Malbork has sometimes been viewed by the Polish people as a relic of German oppression.[19] In 1997 Malbork Castle was designated a World Heritage Site by UNESCO, recognising the importance of the site. It is named the "Castle of the Teutonic Order in Malbork".[20]

Malbork Castle sits on the east bank of the River Nogat. A fortified town was build next to the castle, and in the early 15th century, when the Malbork Castle reached its zenith, the settlement covered less than half the area of the castle of the Teutonic Knights.[8] Malbork Castle is mainly built from red brick. This was the case for many castles along the coast of the Baltic Sea as the region was poor in stone suitable for construction. Covering an area of 52 acres Malbork is the largest brick-built castle in the world.[5] The castle is divided into three enclosures: the Outer Castle (Unterschloss), the Middle Castle (Mittelschloss), and the Upper Castle (Hochschloss).[21][22]

The Outer Castle made up about half the area of Malbork Castle and contained the main entrance. The area contained ancillary buildings such as offices and workshops. Little remains, however, as its defences were dismantled in the early 17th century when Malbork was taken over by a Swedish army. It is the part of Malbork Castle furthest removed from its original state, and the medieval buildings have been turned into shops for tourists, and rooms for the staff who maintain the castle.[23]

The Middle Castle was the bustling administrative centre of the castle complex and had facilities to entertain guests of the Order. The most important buildings it housed were the Knights' Hall and the Grand Master's residential rooms. The Knights' Hall is vast with space for up to 400 people; built in the first half of the 14th century it took around 20 years to complete.[24]