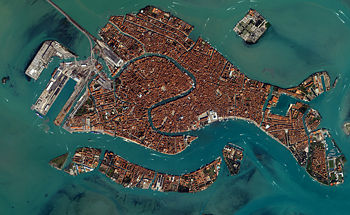 Venice (Italian: Venezia) is a city and major seaport in Northern Italy, in the administrative region, Veneto. It is famous for its canals; for its architecture, art an culture; for its history as a great republic and as a major trade hub in medieval Europe — and not the least as the site for William Shakespeare's 1597 play, "The Merchant of Venice", and 1604 play, "The Tragedy of Othello, the Moor of Venice".

The history of Venice begins with the Langobard invasion in the sixth century, where numerous Italians were driven onto the islands of the Adriatic. Venice got its first doge, Orso, in 727, and got its de facto independence from the Byzantine Empire in the early ninth century. After a period of turbulence, Venice transformed into a republic between 1140 and 1160.

After the sacking of Constantinople in 1204, the Venetians filled the power vacuum by creating their own commercial empire in the eastern Mediterranean. The Venetian empire included many Greek islands, such as Crete and later Cyprus. Venetian control over Crete ended when the Ottomans conquered it in 1645–69.

The republic was ended by Napoleon in 1797, and the Austrians took control over the city and its possessions. Venice joined the unified Italian kingdom in 1866, after Austria's defeat to Prussia in the Austro-Prussian War.