Crete (Modern Greek: Κρήτη, Kriti; Ancient Greek: Κρήτη, Krḗtē) is a large island in the Mediterranean Sea south of Greece, currently part of Greece. The Island measures 8 336 km2 and has 623 666 inhabitants (2005). Its capital city is Irakleio and its second largest city is Canea. Crete forms an administrative region (periphery) of Greece and comprises the four prefectures (nomi) of Canea, Rethymno, Irakleio and Lasithi. It is centered at 35 degrees 15 minutes of North latitude and 24 degrees 45 minutes East longitude.

Crete has the lowest unemployment in Greece. The tourist sector forms the largest part, but there is substantial agricultural production and processing.

There is a large Royal Air Force base at Heraklion and a US-UK signals intelligence facility.

In Operation Mercury, Crete was conquered by German air assault forces, but at extremely heavy cost that prevented Germany from using large airborne forces in the rest of the war. 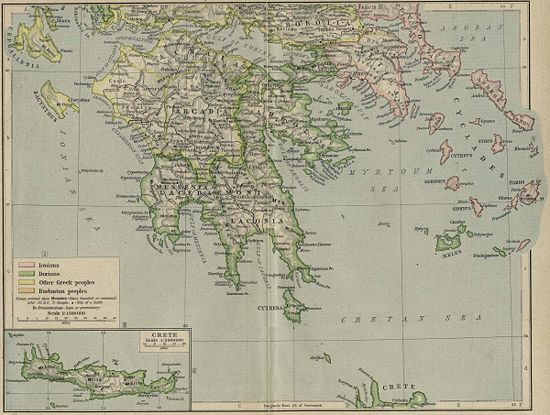 Crete in the context of ancient Greece

It was the site of the Minoan civilization.

In stories from Greek mythology, King Minos had a Minotaur inside a giant labyrinth, but it was killed by the Athenian hero Theseus who used string to find his way out of the maze.