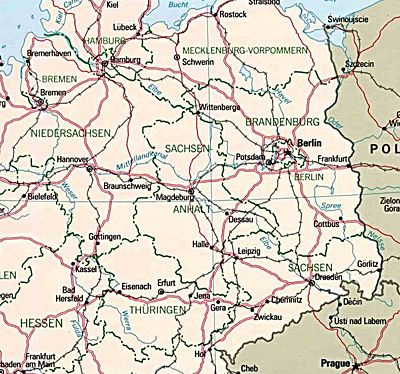 Magdeburg is the capital of Sachsen-Anhalt (Saxony-Anhalt) one of the Bundesländer (constituent states) of Germany. The city lies along the Elbe River, southwest of Berlin. During the period of German partition, it was the most important inland port of East Germany. With about 230,000 inhabitants it is the second largest city of the state. Magdeburg is the seat of a Roman-Catholic bishop (since 1994) and of a bishop in the Evangelical Church. It houses the Otto von Guericke University.

One of the facts that the city is known for is that it was a Kaiserpfalz (literally "Emperor's palace") of Otto the Great, crowned in 962 as the first emperor of the Holy Roman Empire. In the same year the town became the seat of an archbishopric, the boundaries of which were fixed in 968, comprising the bishoprics of Havelberg, Brandenburg, Merseburg, Meissen, and Zeitz-Naumburg. In 2005 Magdeburg celebrated its 1200th anniversary.

Magdeburg became a flourishing commercial center in the 13th century and was a leading member of the Hanseatic League. Its citizens, in almost constant conflict with the archbishops, became nearly independent of them by the end of the 15th century. Magdeburg embraced the Reformation in 1524 and was thenceforth governed by Protestant titular archbishops. During the Thirty Years' War it successfully resisted a siege by imperial forces under Albrecht von Wallenstein in 1629 but was stormed in 1631 by Johann von Tilly, who burned and sacked the city and butchered about 20,000 of the city's 30,000 inhabitants.

By the Peace of Westphalia (1648) the archbishopric became a secular duchy, passing to the electorate of Brandenburg on the death of the last administrator in 1680. In 1806 the fortress of Magdeburg surrendered to Napoleon without fighting and was included in the kingdom of Westphalia until 1813. In 1815 the city became the capital of the newly constituted Prussian province of Saxony. The fortress was dismantled in 1912.

Heavy bombing in 1945 destroyed much of the city, including the Renaissance town hall (1691).

The physicist Otto von Guericke and the composer Georg Telemann were born in Magdeburg.