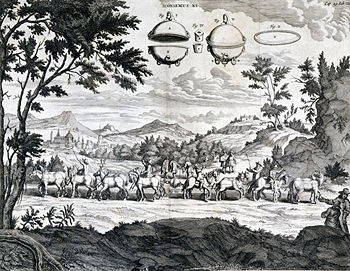 PD Image
Engraving taken from 'Experimenta Nova' (1672) by Otto von Guericke, showing his experiment with an evacuated sphere being carried out at Magdeburg. In this demonstration 16 horses could not pull apart the two halves of an evacuated sphere, which became known as Magdeburg hemispheres. On 8 May 1654, he performed the experiment before the Reichstag.
Courtesy of the Science Museum

Otto von Guericke (November 20, 1602, Magdeburg – May 11, 1686, Hamburg) was a German physicist, engineer, and natural philosopher who invented the first air pump and used it to study the phenomenon of vacuum and the role of air in combustion and respiration.

Guericke was educated at the University of Leipzig and studied law at the University of Jena in 1621 and civil engineering (fortification building) at the University of Leiden in 1623. In 1631 he became an engineer in the army of Gustavus II Adolphus of Sweden, and in 1646 he was chosen as one of the four Bürgermeister (mayors) of Magdeburg (Germany) and magistrate for Brandenburg. In 1666 he was ennobled and changed his name to "Von Guericke". In 1676 he stepped down as mayor because of health reasons. A few years later (1681) he went to live with his son in Hamburg where he died in 1686.

In 1650 Guericke invented the air pump, which he used to create a partial vacuum. His studies revealed that light travels through a vacuum but sound does not. In 1654, in a famous series of experiments that were performed before Emperor Ferdinand III at Regensburg, Guericke placed two copper bowls (Magdeburg hemispheres) together to form a hollow sphere about 35.5 cm (14 inches) in diameter. After he had removed the air from the sphere, 16 horses were unable to pull the bowls apart, even though they were held together only by the air around them. Thus the tremendous force that air pressure exerts was first demonstrated.

In 1663 Von Guericke finished the manuscript for Experimenta Nova (ut vocantur) Magdeburgica de Vacuo Spatio that nine years later appeared in print (Waesberge Amsterdam, 1672). In the beginning of the 1660s he invented the first electric generator, which produced static electricity by applying friction against a revolving ball of sulfur. In 1672 he discovered that the electricity thus produced could cause the surface of the sulfur ball to glow; hence he became the first man to view electroluminescence. Guericke also studied astronomy and predicted that comets would return regularly from outer space.