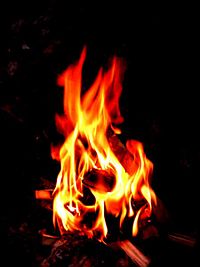 Flame resulting from the combustion (burning) of a fuel.

Combustion or burning is a complex sequence of exothermic chemical reactions between a fuel and an oxidant accompanied by the production of heat or both heat and light in the form of either a glow or flames. The most commonly used fuels are solid coal and hydrocarbon gases or liquids.

A simpler example is the combustion of hydrogen (H2) and oxygen, which is a commonly used reaction in rocket engines:

As can be seen, when air is the source of the oxygen, nitrogen is by far the largest part of the resultant flue gas.

Rapid combustion is a form of combustion in which large amounts of heat and light energy are released, which often results in a fire. This is used in internal combustion engines and in thermobaric weapons. Sometimes, a large volume of gas is liberated in combustion besides the production of heat and light. The sudden evolution of large quantities of gas creates excessive pressure that produces a loud noise. Such a combustion is known as an explosion or detonation.

Turbulent combustion is a combustion characterized by turbulent flows. It is used for industrial applications such as gas turbines and diesel engines because the turbulence helps to mix the fuel and oxidizer.

Incomplete combustion occurs when there isn't enough oxygen to allow the fuel (usually a hydrocarbon) to react completely with the oxygen to produce carbon dioxide and water or when the combustion is quenched by a heat sink such as a solid surface or a flame trap.

The quality of combustion can be improved by the design of combustion devices such as furnace burners and internal combustion engines. Further improvements are achievable by catalytic after-burning devices or by the simple partial return of the exhaust gases into the combustion process. Such devices are required by environmental legislation for vehicles in most countries, and may be necessary in large combustion sources, such as the steam generating furnaces in thermal power plants, to reach legal emission standards.

Combustion with other oxidants

Oxygen is usually assumed as the oxidant when talking about combustion, but other oxidants exist. Nitrous oxide (NO) is used in rockets and in race cars. Fluorine (F2), another oxidizing element, can produce a combustion reaction that yields fluorinated products rather than oxides. For example, mixtures of gaseous fluorine and methane are explosive. Chlorine trifluoride is a strong fluorinating agent that ignites fuels more readily than oxygen.

Generally, the chemical equation for stoichiometric burning of hydrocarbon in oxygen is as follows:

For example, the burning of propane is:

The simple word equation for the combustion of a hydrocarbon in oxygen is:

If the combustion takes place using air as the oxygen source, the nitrogen can be added to the equation, although it does not react, to show the composition of the flue gas:

For example, the burning of propane in air is:

The simple word equation for the combustion of a hydrocarbon in air is:

Nitrogen may also oxidize when there is an excess of oxygen. The reaction is thermodynamically favored only at high temperatures. Diesel engines are run with an excess of oxygen to combust small particles that tend to form with only a stoichiometric amount of oxygen, necessarily producing nitrogen oxide emissions.

The act of combustion consists of three relatively distinct but overlapping phases:

Assuming complete combustion under adiabatic conditions (i.e., no heat loss or gain), the adiabatic flame temperature can be calculated. The calculation is based on the first law of thermodynamics (i.e., the conservation of energy) and on the fact that the heat of combustion is used entirely for heating the fuel, the combustion air or oxygen, and the combustion product gases.[1][2]

In the case of fossil fuels burnt in air, the combustion temperature depends on:

The adiabatic flame temperature increases for higher heating values and for higher inlet air and fuel temperatures and for stoichiometric air-fuel ratios approaching one.