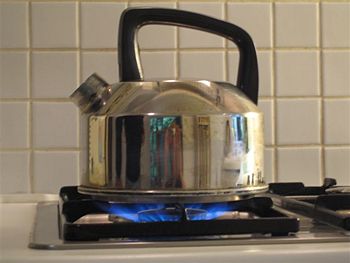 PD Image
Energy of the hot gas flame flows into the kettle and the liquid water in it.

Heat is a form of energy that is transferred between two bodies that are in thermal contact and have different temperatures. For instance, the bodies may be two compartments of a vessel separated by a heat-conducting wall and containing fluids of different temperatures on either side of the wall. Or one body may consist of hot radiating gas and the other may be a kettle with cold water, as shown in the picture. Heat flows spontaneously from the higher-temperature to the lower-temperature body. The effect of this transfer of energy usually, but not always, is an increase in the temperature of the colder body and a decrease in the temperature of the hotter body.

A vessel containing a fluid may lose or gain energy without a change in temperature when the fluid changes from one aggregation state to another. For instance, a gas condensing to a liquid does this at a certain fixed temperature (the boiling point of the liquid) and releases condensation energy. When a vessel, containing a condensing gas, loses heat to a colder body, then, as long as there is still vapor left in it, its temperature remains constant at the boiling point of the liquid, even while it is losing heat to the colder body. In a similar way, when the colder body is a vessel containing a melting solid, its temperature will remain constant while it is receiving heat from a hotter body, as long as not all solid has been molten. Only after all of the solid has been molten and the heat transport continues, the temperature of the colder body (then containing only liquid) will rise.

At present the unit for the amount of heat is the same as for any form of energy. Before the equivalence of mechanical work and heat was clearly recognized, two units were used. The calorie was the amount of heat necessary to raise the temperature of one gram of water from 14.5 to 15.5 °C and the unit of mechanical work was basically defined by force times path length (in the old cgs system of units this is erg). Now there is one unit for all forms of energy, including heat. In the International System of Units (SI) it is the joule, but the British Thermal Unit and calorie are still occasionally used. The unit for the rate of heat transfer is the watt (J/s).

Equivalence of heat and work

Although heat and work are forms of energy that both obey the law of conservation of energy, they are not completely equivalent. Work can be completely converted into heat, but the converse is not true. When converting heat into work, part of the heat is not—and cannot be—converted to work, but flows to the body of lower temperature that is out of necessity present to generate a heat flow.

The important distinction between heat and temperature (heat being a form of energy and temperature a measure of the amount of that energy present in a body) was clarified by Count Rumford, James Prescott Joule, Julius Robert Mayer, Rudolf Clausius, and others during the late 18th and 19th centuries. Also it became clear by the work of these men that heat is not an invisible and weightless fluid, named caloric, as was thought by many 18th century scientists, but a form of motion. The molecules of the hotter body are (on the average) in more rapid motion than those of the colder body. The first law of thermodynamics, discovered around the middle of the 19th century, states that the (flow of) heat is a transfer of part of the internal energy of the bodies. In the case of ideal gases, internal energy consists only of kinetic energy and it is indeed only this motional energy that is transferred when heat is exchanged between two containers with ideal gases. In the case of non-ideal gases, liquids and solids, internal energy also contains the averaged inter-particle potential energy (attraction and repulsion between molecules), which depends on temperature. So, for non-ideal gases, liquids and solids, also potential energy is transferred when heat transfer occurs.

The actual transport of heat may proceed by electromagnetic radiation (as an example one may think of an electric heater where usually heat is transferred to its surroundings by infrared radiation, or of a microwave oven where heat is given off to food by microwaves), conduction (for instance through a metal wall; metals conduct heat by the aid of their almost free electrons), and convection (for instance by air flow or water circulation).

If two systems, 1 (cold) and 2 (hot), are isolated from the rest of the universe (i.e., no other heat flows than from 2 to 1 and no work is performed on the two systems) then the entropy Stot = S1 + S2 of the total system 1 + 2 increases upon the spontaneous flow of heat. This is in accordance with the second law of thermodynamics that states that spontaneous thermodynamic processes are associated with entropy increase. In general, the entropy S of a system at absolute temperature T increases with

when it receives an amount of heat Q > 0. Entropy is an additive (size-extensive) property.

The hotter system 2 loses an amount of heat to the colder system 1. In absolute value the exchanged amounts of heat are the same by the law of conservation of energy (no energy escapes to the rest of the universe), hence

Here it is assumed that the amount of heat Q is so small that the temperatures of the two systems are constant. One can achieve this by considering a small time interval of heat exchange and/or very large systems.

Remark: the expression ΔS = Q/T is only strictly valid for a reversible (also known as quasistatic) flow of energy. It is possible[1] to define:

It is assumed that ΔSint is much smaller than ΔSext, so that it can be neglected.

It is strictly speaking not correct to say that a hot object "possesses much heat"—it is correct to say, however, that it possesses high internal energy. The word "heat" is reserved to describe the process of transfer of energy from a high temperature object to a lower temperature one (in short called "heating of the cold object"). The reason that the word "heat" is to be avoided for the internal energy of an object is that the latter can have been acquired either by heating or by work done on it (or by both). When we measure internal energy, there is no way of deciding how the object acquired it—by work or by heat. In the same way as one does not say that a hot object "possesses much work", one does not say that it "possesses much heat". Yet, terms as "heat reservoir" (a system of temperature higher than its environment that for all practical purposes is infinite) and "heat content" (a synonym for enthalpy) are commonly used and are incorrect by the same reasoning.

The molecules of a hot body are in agitated motion and, as said, it cannot be measured how they became agitated, by work or by heat. Often, especially outside physics, the random molecular motion is referred to as "thermal energy". In classical (phenomenological) thermodynamics this is an intuitive, but undefined, concept. In statistical thermodynamics, thermal energy could be defined (but rarely ever is) as the average kinetic energy of the molecules constituting the body. Kinetic and potential energy of molecules are concepts that are foreign to classical thermodynamics, which predates the general acceptance of the existence of molecules.

As a result Carathéodory was able to obtain the laws of thermodynamics without recourse to fictitious machines or objectionable concepts as the flow of heat.[2]