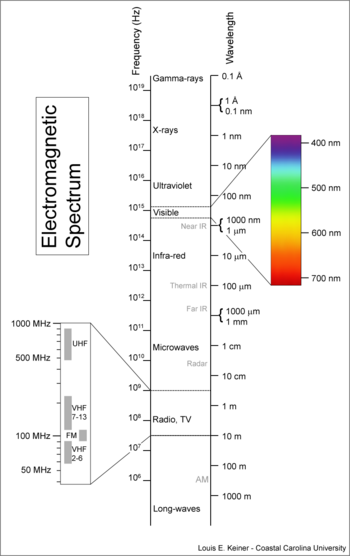 Since Albert Einstein's work of 1905, electromagnetic radiation is seen as a flux of photons (also known as light quanta) through space. This view is reminiscent of Isaac Newton's view, who saw light as a stream of corpuscles. This view was rejected in the early 19th century by Thomas Young and Augustin-Jean Fresnel, who considered light as waves. Later in the 19th century these waves were seen as oscillations of the ether by physicists as James Clerk Maxwell, Heinrich Rudolf Hertz, and Hendrik Antoon Lorentz. In 1861 Maxwell had the great theoretical insight that (visible) light is nothing but electromagnetic radiation of certain wavelengths; he predicted that (non-visible) electromagnetic waves of other wavelengths must exist too. This was confirmed experimentally by Hertz in the years 1886–1888.

An electromagnetic wave being characterized by its frequency ν, Einstein postulated light quanta to be packets of energy hν. These massless elementary particles move with the universal speed of light c. The symbol h is Planck's constant. Photons of the same energy hν are indistinguishable, they are bosons. The number density of photons corresponds to the intensity of the electromagnetic radiation.

Electromagnetic waves play an important role as carriers of information in the form of radio, television, cell phone, etc. signals.

On Earth the most important source of energy is the the Sun, that transmits its energy in the form of electromagnetic radiation. It is no coincidence that the maximum sensitivity of the eyes of most animals and humans is exactly at the most abundant part of the electromagnetic energy radiated by the Sun and not filtered by the Earth's atmosphere. This is the part of the EM spectrum that is the visible light. All life on Earth depends on the energy received from the Sun and by photosynthesis this energy is converted into plant life and atmospheric oxygen. The fossil fuels that modern society uses—gas, oil, and coal—are stored sources of energy received in the past millions of years from the Sun.