The sun is a middle-sized main sequence star, more specifically a yellow dwarf, which has eight recognized planets, three dwarf planets and myriad asteroids revolving around it. It mainly consists of hydrogen, which it converts to helium through a process of nuclear fusion, providing the heat and light that allowed life to form here on our planet, Earth. The sun is about 93 million miles, or about eight light minutes, away from Earth. 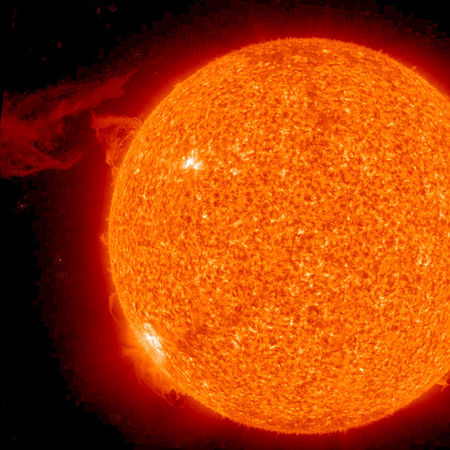 As a star, there is nothing unusual about it. But the sun is more important to people than any other star. Without the heat and light of the sun, there would be no life on Earth. It is the only star of which we can clearly observe the surface. For this reason, scientists study it to learn about stars much farther away. The visible surface of the sun consists of hot gases that give off light and heat. Only about one two-billionth of sun's light and heat reaches Earth. The rest of the sun's light and heat is lost in space.

Revolution period in the Milky Way: About 225 million years. The sun has made roughly 20 revolutions in its 4.6 billion year lifetime.

Chemical makeup: Hydrogen, about 75%; helium, about 25%; at least 70 other elements make up the remaining 1 to 2 percent

Density: Convection zone - about 1/10 that of water

Radiative zone - about equal to that of water