A star is usually made of gas and a substance known as plasma. The Sun (Sol) is a star. A portion of the stars, however, those called white dwarfs and neutron stars, are composed of tightly packed atoms or subatomic particles and are much more dense than anything on Earth.

The Sun is a single star. However, about 75 % of all stars are binary stars, two stars that orbit each other. The star nearest the Sun, Proxima Centauri, is part of a multiple-star system which includes Alpha Centauri A and Alpha Centauri B.[1]

A star is so massive that its gravity pulls it in on itself and would cause it to collapse if there was nothing to oppose this gravity. The gravity is opposed by hydrostatic support created by the pressure of hot gas and radiation in the star's interior. The reason for the heat and radiation is nuclear reaction near the centre of the star. While these two forces oppose each other, the star is in the main sequence phase of its evolution. Stars contract or collapse in on themselves before the main sequence phase because they are not hot or dense enough for nuclear reactions to begin. Heat generated during contraction provides hydrostatic support and counteracts the pull of gravity. After the main sequence, most of the fuel is used up and the lack of sufficient hydrostatic support results in the star collapsing under its own gravity.[2]

Stars are categorised by their five main attributes;

Astronomers use a diagram to show how these are all related, the Hertzsprung-Russell (H-R) diagram.

A star's luminosity is the measure of all energy it radiates each second (just as power is measured), usually understood to be at all wavelengths (bolometric luminosity or Lbol) and is measured as ergs per second. Star luminosity is commonly compared to the Sun whose luminosity is indicated as Lsun = 4 x 1033 ergs/s. [3]

Stars radiate visible light but they also radiate energy the human eye can not see. The term for all radiation from a star is bolometric magnitude or bolometric flux which means the total energy out put over the entire electromagnetic spectrum, not just visible light.

The Sun has a luminosity of 400 trillion trillion watts (1024). Commonly in astronomy however, the luminosity is measured another way, by comparing it with the Sun. In this way Alpha Centauri is about 1.3 times as luminous as the Sun and Rigel is 150,000 times as luminous.[5]

How bright a star looks is controlled by its actual brilliance and its distance from Earth. A star’s brilliance is the amount of visible light it produces. So a nearby star can be quite dim if it is not generating a great deal of light while a star much further away can be brighter because it actually is much brighter. The star Alpha Centauri appears brighter than another star called Rigel. It would seem that Alpha Centauri produces more energy. However, Rigel is actually much brighter but it is much further away from Earth. Alpha Centauri is about 4.4 light years away while Rigel is 1,400 light years from Earth.

Luminosity is variable. Small changes may be responsible for the Little Ice Age of the 15th through 18th centuries when there may have been a decrease in the Sun's luminosity. One possible explanation of these changes is that they are triggered by modifications of the magnetic field produced in a star's interior. The mechanism of these modifications are yet to be revealed.[7]

The Yerkes classification is a schema for classifying stars by their luminosity,[8] also known as M-K established in 1943.[9] This classification scheme measures surface gravities of stars by measuring the shape and nature of certain spectral lines.

With or without a telescope or binoculars, stars display a range of colours--reddish, yellowish and bluish--not very strong colour, but the variations are visible. The Sun is yellow, as is Pollux, Betelgeuse looks reddish and Rigel looks bluish. Star colour is a function of its surface temperature.[10] Dark red stars have surface temperatures of about 2500 K and bright red stars reach about 3500 K. For yellow stars, e.g. the sun, surface temperature is approximately 5500 K. Blue stars are in the range of 10,000 to 50,000 K in surface temperature.

Since the human eye can only discern colours of the visible spectrum we do not see other wavelengths of the spectrum and stars emit a broad spectrum (bands) of colours. The colours in the visible spectrum, all the colours of the rainbow, can be viewed with a prism which separates the colour bands. Red is produced by particles of light (photons) with the least energy, all the way to violet, the photons with the most energy.

Studying the electromagnetic spectrum of stars is an important function of astronomy.[13] Displaying the spectrum of a star shows dark bands called absorption lines, or Fraunhofer lines, where the radiation energy is weaker, caused by a cooler gas between the observer and the hotter emitting gas.[14]

Occasionally there are also bright emission lines where radiation energy is especially strong. 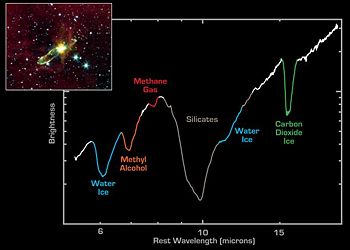 Absorption lines exist because a chemical element or compound absorbs radiation with the same energy at that particular line on the spectrum. The Sun, for example, has absorption bands in the green range of the spectrum because there is calcium in the outer layer of the sun absorbing radiation at the same energy. While most stars have absorption lines in the visible spectrum, emission lines are more common in other bands of the spectrum. Nitrogen in a sun’s atmosphere, for example, will result in emission lines in the ultraviolet band. [6][15][16]

An example of a spectrum for a particular star is an embedded star in Herbig-Haro 46/47 as determined by the Spitzer Space Telescope (SST). This is a low mass protostar ejecting a jet of supersonic gas and creating a bipolar, or two-sided, outflow which interacts with the surrounding interstellar medium--bright, nebulous regions of gas and dust that are buried within a dark dust cloud. Elements and compounds present in the protostar as determined from the EM spectrum include water ice, methyl alcohol, silicates and carbon dioxide ice.[17]

A star's mass is its most fundamental property. Mass governs the evolution of a star, what fuels it will burn, how long it will live, its colour. Determining a star's mass is an essential part of understanding a specific star. Knowing the mass of main sequence stars determines the answers to a number of problems, such as the mass content of a galaxy and the manner in which it evolves. The mass-luminosity relation (MLR) is a fundamental relationship in numerous areas of astronomy.[18]

Stars have limited amounts of fuel. As each type of their fuel is consumed, the star must burn successively different types of fuel. In the beginning a star burns hydrogen in a process that synthesises helium. When the hydrogen is consumed, the helium is then burned and that in turn synthesises carbon. To continue to burn fuel produced at each stage, the star must be hot enough to convert progressively heavier elements. Smaller stars cannot generate sufficient heat to do so and eventually lose energy.

Eventually, as the fuel is consumed, stars less than 5 solar masses swell into red giants which eventually eject their outer layers forming planetary nebulae, leaving only the inner core, a white dwarf.[19]

Stars have a beginning and an end. The Sun formed about 4.6 billion years ago and may last another 5 billion years. After that it will become a red giant. Later it will lose its outer layers and the remaining core of the star will become a white dwarf, eventually fading to a black dwarf, dense and without light.

Not all stars end this way. Some will cool off and without expanding to a red giant stage will become white dwarfs, then black dwarfs.

Another possibility for a small percentage of stars is a spectacular explosion called a supernova. The star explodes and loses most of its material. In an even smaller number of cases, the star explodes completely, leaving nothing - but this is a very rare occurrence.[20]

Stars are grouped in galaxies with rare exceptions.[21] Astronomical observations to date have recorded galaxies at distances of 12 to 16 billion light years from the Sun. The Sun is in the galaxy called the Milky Way (because of its appearance as a faint band of light encircling the night sky) which contains an estimated 100 billion stars. It is estimated that there are more than 100 billion galaxies in the universe and average about 100 billion stars per galaxy. This means that there is an estimated 10 billion, trillion stars in the universe (1021). From Earth however, without using binoculars or a telescope, it is only possible to see about 3,000 of them.