A supernova (plural supernovae), is an exploding variable star object, that reaches a maximum brightness at about the magnitude of an entire galaxy. Historically the supernovae were regarded as nova stars, but in the early 20th century it was discovered that the supernovae were much brighter by average about 10000 times the luminosity of a nova. Unlike the novae, who explode by thermonuclear explosions of accreted matter, the supernovae are ignited by a collapse of an electron degenerate star core or a white dwarf over the mass limit termed the Chandrasekhar limit of 1.4 sun masses. This degenerate object then implodes to a neutron star, but rebound and photodissociation processes also causes the outer parts of the star to explode violently, causing the supernova brightness rise. 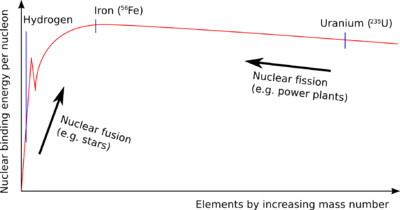 Nuclear binding energy per nucleon. Note iron-56 at the peak in the middle.

Unlike stars with less mass, stars with more than five times the mass of our Sun can continue to burn each element synthesised in turn, hydrogen, helium, then carbon, oxygen, silicon and so forth until they are left with iron.

Due to a phenomenon known as nuclear binding energy, nucleons such as protons and neutrons will weigh a little less when they are bound in a nucleus than when they are by themselves. This mass deficiency is different from element to element, with hydrogen having a very low deficiency. Iron has the highest deficiency of all elements, and will not release energy when fusioned (nor when fissioned).[1] Instead, it draws thermal energy from the core leaving the star without energy to resist the force of gravity. This results in a collapse. The star core can collapse in about 15 seconds, which is extremely fast. During the collapse of the star, the density increases and elements heavier than iron are produced.

Stars with masses between 5 and 8 times that of our Sun will collapse until they detonate in a catastrophic supernova explosion forming a neutron star.[2] A neutron star is a very dense body where protons have been converted to neutrons, allowing more compaction. Protons repel electrically and thus pose an obstacle to gravity.

What actually causes the supernova explosion is unclear. One explanation is that after having consumed their fuel, their overall energy level declines with the end of exothermic (heat-emitting) nuclear burning and they are unable to resist the forces of gravity. Their iron core collapses under gravitational forces until it is so dense it reaches nuclear densities and rebounds. As it rebounds it generates an outwardly propagating shock wave and a burst of neutrinos on the order of 1053 ergs. The resultant explosion ejects the stellar envelope with a kinetic energy of 1051 ergs at a velocity of 104 km s−1.

In the process of the explosion elements heavier than nickel and iron are synthesised. The radioactive decay of 56Ni and 56Co create the energy to produce long-term optical light, reaching a luminosity in the range of 1042 to 1043 erg s-1 about 10-20 days after the explosion.[3]

Stars with masses that exceed 10 times that of our Sun collapse with such force that even a neutron star cannot resist the pressure of the collapsing star and the supernova creates a black hole.[2] The black hole is the ultimate victory of gravity, having an escape speed equal to that of light at its Schwarzschild radius.