A nova (plural novae) is a star of low brightness, that once in a time brightens very rapidly and then faints slowly during a time of months up to a year, then stays faint constantly after the outburst. The name nova stella, "new star" in Latin, was originally attributed to objects conceived as newly occurring stars, but when these "new stars" slowly fainted from sight, the name "nova" grew into a term in its own right, applied to these rapidly occurring objects that in the end fainted away. 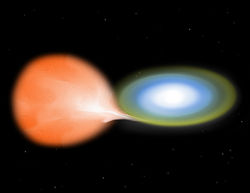 A nova progenitor star system, the subdwarf to the left, and a white dwarf surrounded by an accretion disk to the right

In modern astronomical terms novae proper are subdwarf stars that increase the magnitude by 7 to 19 units in a few days[1]. They belong to the class of cataclysmic variable stars. Physically, the novae are narrow double stars with one white dwarf component accreting a hot gas disk from a subdwarf component, gas that is removed from the outer atmosphere of the subdwarf. When enough matter have accreted to the accretion disk around the white dwarf, this gas ignites in a runaway fusion reaction causing the star system to explode in brightness. Theoretically a nova proper may reignite many times, and a few novae, those in the subclass of recurrent novae, are known to have erupted repeatedly in history.

Historically conceived as extra bright novae, the supernovae are indeed behaving as novae but their brightness increase over 20 magnitudes. They are currently regarded as a separate kind of objects. The supernova explosions are caused by the collapse of a white dwarf or a degenerate star core beyond the mass of the Chandrasekhar limit of about 1.4 sun masses, causing an energetic explosion destroying the star. Other astrophysical explosions attributed the name "nova" are the fairly hypothetical hypernovae, the eruptive variables dwarf novae and the newly discovered luminous red novae.

A classic nova, the most common, is the result of the accumulation of matter on the surface of a white dwarf in a binary system. White dwarfs are the remnants of old stars that have burned most of their fuel and have lost much of their outer layers, leaving them small and very hot.

In a few cases when a classical nova have experienced registered outbursts more than one time in recorded history, the object is classified as a recurrent nova. The mechanism behind the eruptions are believed to be essentially identical to those of the classical novae.

A supernova is an astronomical object exhibiting the same kind of brightness light curve as a classical nova, but with a far brighter maximum at about the absolute magnitude of –15 to –20, which at times exceed the brightness of one entire galaxy. The discovery that the supernova explosions were of a distinct kind was made in the early 20th century when distance to the Andromeda galaxy were researched from a diversity of systematic observations, and then concluded from the earlier observation of the supernova SN1885 in this galaxy.

Hypernovae are a theoretical model to explain vast amounts of gamma ray bursts greater than what is expected from a supernova, during a process in which a black hole is formed. Hypernova release hundreds of times more energy that a supernova.

There are a number of possible candidates for this category, notably two suspected remnants 25 million light years away in the spiral galaxy M101: MF83 and NGC5471B.

Two possible explanations for a hypernova is that they may extremely large stars, far larger than 10 stellar masses, that undergo a process that differs from the collapse and rebound of a supernova. They might also be the result of the collision of two stars in a binary system.[3]

In 2003, on March 29, NASA's High Energy Transient Explorer (HETE-II) noted a gamma ray burst (GRB) in the Constellation Leo. The burst was confirmed at another site, the 40-inch telescope at the Siding Spring Observatory (Australia) which detected that very bright optical afterglow occurring 90 minutes after the GRB. The UVES high-dispersion spectrograph on the 8.2-m VLT KUEYEN telescope at the ESO Paranal Observatory in Chile then obtained a detailed spectrum of the new object, the source of the GRB. The spectra showed a gradual emergence of a supernova spectrum in what was the most energetic class of hypernova.

The current explanation is that a star about 25 times more massive than our sun had detonated with an expanding velocity exceeding 30,000 km/sec. Apparently this is due to the very rapid, non-symmetrical collapse of the inner region of a highly developed star (this is also referred to as the "collapsar" model).

Two thousand, six hundred fifty million years ago, the outer layers of the star were still in place when a black hole formed in the inner core in a matter of seconds and a jet of stellar material issued forth from the black hole. At that point, the outer-layers were shattered by the jet and stellar winds of newly formed radioactive nickel-56. The hypernova derives its brightness from the radioactive nickel-56. Gamma ray bursts were produced when the jet from the black hole encountered nearby matter. [4]