From Citizendium
(Redirected from Planets)
Jump to navigation Jump to search

According to the International Astronomical Union (IAU), a planet is a celestial body orbiting a star or stellar remnant that is massive enough to be rounded by its own gravity (but not massive enough to cause thermonuclear fusion in its inner core), and has cleared its neighbouring region of planetesimals. [1] [2] There are eight bodies in the Solar System that meet this definition: Mercury, Venus, Earth, Mars, Jupiter, Saturn, Uranus and Neptune.

Bodies that orbit the Sun and are rounded by their own gravity, but have not cleared the neighbourhood, are called "dwarf planets." One of them is Pluto, which was formerly considered a planet. Other bodies orbiting the Sun are generically called "small bodies of the Solar System."

Another related term is "exoplanet." Although there is no official defition for this term, it is often used to indicate bodies analogous to the planets, but that orbit stars other than the Sun.[3]

The planets of the Solar System 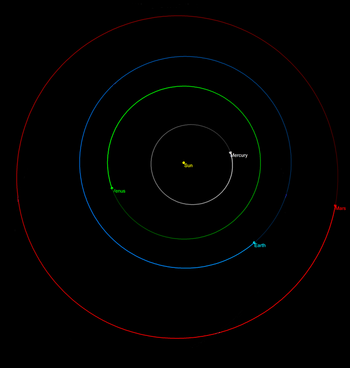 The eight planets orbiting around the sun can be subdivided into three main groups. The inner four, called terrestrial planets, have a rocky composition and are relatively small in size. The fifth and sixth planets (Jupiter and Saturn) are gas giants, and the outermost two (Uranus and Neptune) are ice giants, being considerably larger in mass but less dense than the terrestrial planets. At one time, the four outer planets were all considered "gas giants". The planets are listed here from nearest to farthest in distance from the sun.

After its discovery in 1930, Pluto was considered a planet up until 2006, when the International Astronomical Union reclassified it as a dwarf planet.

The word "planet" came from the greek πλανήτ- (planēt-), meaning "wanderers." Before the invention of the telescope, there were seven planets visible in the sky; the ancient Greeks considered each one to be dedicated to a deity:

as well as the Sun and Earth's Moon, the biggest wanderers in the sky. Philosophers in antiquity created many models of the universe, of which the best-known is Aristotle's. In his system, each planet belongs to one crystalline sphere, concentric with the others. Inner the seven planets' spheres are the material spheres (grosso modo, the Earth); outside, the "sphere of fixed stars."

In the Roman Empire, the planets became known directly by the name of the associated deity - not the Greek one, but the corresponding Latin god. So, Phainon became Saturnus; Phaethon, Jupiter; Pyroeis, Mars; Phosphoros, Venus; and Stilbon, Mercurius. These Latinized names remain current in European languages. Also in the Latin tradition, as well as the Germanic, the seven days of the week have the names of the seven planets.

After the Copernican Revolution, however, the definition of a planet changed: they are all the bodies that directly orbit the Sun; the Earth thus turns into a planet, the Moon becomes Earth's satellite instead of a planet, and the so-called "Solar System" then has six planets (Mercury, Venus, Earth, Mars, Jupiter and Saturn). Later, new bodies, unseen by the naked eye, were baptized as planets, following the Latin-name tradition: Uranus was added in 1781, though not named till later; the first four minor planets to be discovered (Ceres, Pallas, Juno and Vesta) were originally recognized by most authorities as planets; Neptune was discovered in 1846 and numerous additional minor planets starting about the same time; some authorities originally added all these to the list of planets, but this became less popular as more were discovered, and the official numbering of minor planets, started in 1852, began with Ceres; as a result, most authorities from that time on excluded minor planets from the listing of planets, leaving only 8; Pluto was added in 1930.

But many other small bodies orbit the Sun, such as the bright comets and the pallid asteroids. The crisis in definition started in the 1980's and 1990's, when many bodies as big as -- or, in a few cases, bigger than -- Pluto started to be discovered beyond Neptune's orbit. Called Transneptunian objects, they sparked a discussion about what could be a good and precise definition of "planet." The discussion ended on August 24, 2006, when the IAU approved a resolution that officially defines the term. [1]

Planets are believed to form from the disk of dust that surrounds a newly formed star. Gravitational forces pull the dust into lumps. The lumps gradually collide and join to make larger lumps or asteroids. These join further to make larger and larger planets until the planet has cleared its orbit of objects.

Within the solar system, three classes of planets, based on material composition, are recognized.

At one time, Uranus and Neptune were classified as gas giants along with Jupiter and Saturn. Once it became clear that they were compositionally different, they were given a new classification as ice giants.

Believers in western astrology claim that the position of the planets within various sections of the ecliptic can be an indicator of events on Earth. By carefully measuring the orbits and positions of the planets and calculating their future paths, it is believed, one can predict future events. The scientific community, however, almost universally considers astrology to be a pseudoscience or superstition, and there is no widely accepted scientific evidence for its validity.

In Chinese astrology, the five visible planets are associated with the five Chinese "elements" as follows:

In science fiction, visitors to (or invaders of) Earth typically originate from a different planet. The planet Mars was often used as an the alien home world in early science fiction stories. Notable examples include the 1898 H. G. Wells novel, The War of the Worlds, the 1961 Robert A. Heinlein novel Stranger in a Strange Land, and the 1960s American television show My Favorite Martian.

In the late 1800s, the professional astronomer Percival Lowell put forth the idea that intelligent beings lived on Mars, as evidenced by canals that he believed he had observed through a telescope, though it turned out that what he saw were not actual canals. Nonetheless, the idea of intelligent life on Mars was persistent enough that a 1938 radio adaptation of The War of the Worlds, by Orson Welles, caused significant panic among many radio listeners who tuned in to the program and thought that Earth really was under attack by Martians. Eventually, as public perception of intelligent life on Mars became a less and less plausible basis for fictional stories, it became more common for fiction writers to use non-existent planets from outside the solar system as the home worlds of alien visitors. Examples include:

A 1975 record album by Paul McCartney and Wings is titled Venus and Mars, as is one of the songs on the album.

The 1992 book by John Gray, Men Are from Mars, Women Are from Venus: The Classic Guide to Understanding the Opposite Sex, was written as a guide to help heterosexual couples better understand the differences in how people of the opposite sex (typically) think and communicate.