This article is about Earth (planet). For other uses of the term Earth, please see Earth (disambiguation). 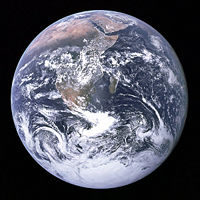 Earth is the only place in the universe known to harbour life. It is the third planet out from its sun. Earth orbits around 93 million miles (150 million km) from the sun, within a region neither too hot nor too cold for its inhabitants to exist. In appearance, it is a blue-and-white little world, settled in a backwater region of the Milky Way galaxy.

The accepted scientific view is that Earth and every other object in the solar system descend from a great cloud of interstellar gas and dust that condensed to form the sun about 4.6 billion years ago. Life is known to have found a foothold only on Earth - more than 3.5 billions years ago - however, in recent years, researchers have made advances concerning potential habitats for life on other planets or their moons.

Earth is home to millions of species, with humans dominant. Humans have survived and spread through exploiting Earth's resources, warming the Earth in the process - a fact noted by the vast majority of climate scientists.[1] As a result, flooding, drought and extreme weather seem to be more common today than in planet's recent past.[2]