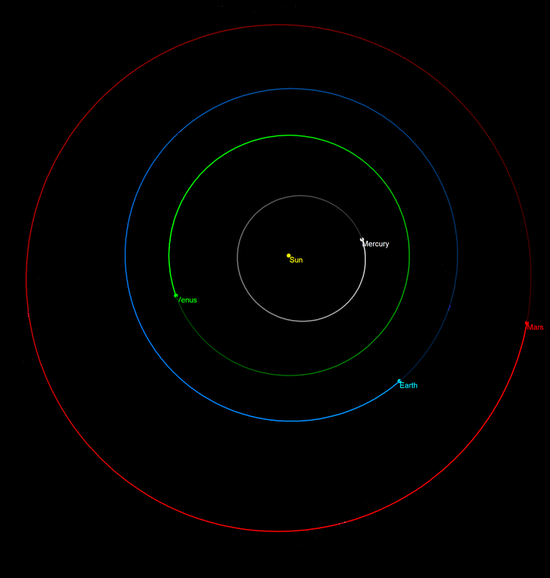 An orbit is a (nearly) closed or repeating path [1] traveled by one object around another due to the force of gravity. Orbits are approximately elliptical in shape, and can be very nearly circular. (A circle is a special case of an ellipse, where the ellipse has an eccentricity of zero.)

In reality, an object orbiting another object actually orbits the center-of-mass location of the two objects. Typically, one of the objects is very much more massive than the other, so that the center of mass location very nearly coincides with that of the larger object. Examples include planets orbiting a more massive sun, or satellites orbiting a planet. Additionally, the center of the larger object can also be considered to orbit about the center of mass, though this motion is often described as more of a wobble than an orbit.

Actual orbits deviate from true ellipses owing to a number of factors:

If the speed of the smaller-mass object equals or exceeds the escape speed, then it will follow a path that is approximately parabolic or hyperbolic, respectively, rather than orbiting the larger object.

If the speed of the smaller-mass object is too low, it can crash into the larger object before completing a full orbit.

As a figure of speech

Aside from use in a strictly technical sense, orbit is a word used in multiple figures of speech, as in "She has been in orbit ever since she got the news" (meaning: pleased and excited); or as in "He was in the President's orbit" (meaning: within the sphere of influence of the President).[2]