The Big Bang is an important aspect of the theoretical model of the universe. The Big Bang means that essentially the universe began at Planck Time, 10-43 seconds, from a single point about 13.7 billion years ago, expanding at great speed to its current state. Prior to Planck Time, the Four Forces, strong, electromagnetic, weak and gravity, were united in one force.

The Universe continued to expand and its temperature dropped to about T=1013 K until 0.0001 seconds after the Big Bang. Antiprotons and protons annihilated each. For some reason, apparently most antimatter was annihilated but there were surviving protons and neutrons. There were also a very large number of photons per proton and neutron .

Eventually matter coalesced to form larger bodies, then stars and galaxies. The first stars formed about 100 million years after the Big Bang.

Unstable stars became supernovae, and when they exploded they spread all the elements from carbon through uranium throughout the Universe. Numerous galaxies then formed as dark matter, stars and gas coalesced and merged. Later, clusters of galaxies formed and eventually, the Solar System and Sun formed about 4.6 billion years ago. 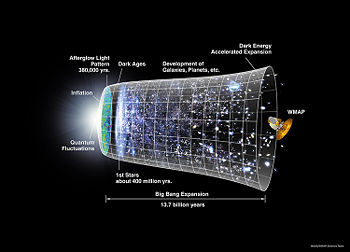 Ironically, the Big Bang Theory is not about the big bang, it is about the aftermath of the big bang, describing how the universe expanded and cooled, how galaxies and stars formed from coalescing matter. It does not actually explain the physics underlying the big bang, what it was that actually went bang, what caused the bang or what took place before the bang. Those are problems that the inflationary theory attempts to address. The inflationary theory provides a prehistory, so to speak, of the moments before the big bang and is now an integral aspect of the traditional Big Bang Theory.[5]

Evidence for the Big Bang Theory

The counter argument to the Big Bang has largely been the Steady State Theory. The Steady State implies simply that, the Universe is not changing or growing. Proposed in 1948 by Hermann Bondi (1919-2005), Thomas Gold (1920-2004) and Fredrick Hoyle (1915-2001), the Steady State adheres to the "Perfect Cosmological Principle", and assumes that the Universe is homogenous and isotropic (the same at all times in all places and in all directions respectively).

Given that observational data provides evidence that the Universe is expanding, the Steady State requires that density remains the same and matter, must thus, be continuously created. The Steady State Theory was a true scientific theory and as such it contained predictions that could be tested. Eventually those predictions were demonstrably incorrect.[6]

One of the oldest problems regarding the age of the universe is Olber's Paradox. The darkness of the night sky in a universe which is eternal and stars are homogenously distributed presents a contradiction: Why isn't the night sky uniformly bright? In the Steady State there are infinitely many stars so that every portion of the sky should have a star, and the entire heavens should be as bright as the sun. It would be like being in a hollow black body with a temperature of about 6000 degrees Centigrade. This is Olbers' paradox. Kepler in 1610 and Halley and Cheseaux in the eighteen century discussed this, but Olber takes credit for the 'paradox' because of his more extensive investigations in the nineteenth century.

Reasons as to why this is possible (some which also uphold the Steady State and explain the paradox) include:

This presents a similar problem--the dust would have heated up as well resulting in a hot, glowing dust filled universe. Enough dust to reduce the radiation would obscure the sun.

This would impose a certain restraint on the Steady State Theory. However, if there could be an infinity of stars and some are obscured behind others so that only a finite angular area is subtended by them, this may be correct in part. It has yet to be determined. If the stars are not distributed homogeneously, that is they are distributed fractally, then there could be empty patches, and the sky would possibly appear dark in some areas.

As a star moves away, its light shifts to the red end of the spectrum, since the light waves are longer, reducing observed luminosity. This is considered to be correct and may be responsible in part for the dark night sky. The expanding nature of the universe is considered to be one of the most important phenomenon in support for the Big Bang Theory. Initially this research was done by Vesto Slipher, proposed by Alexander Friedmann and eventually established by Hubble,[1]

The proposed finite age of the Universe is probably the largest effect in explaining the dark sky. This does not support the classic Steady State Theory since it would mean that the Universe was not the same as it is now in the past. If we live inside an "Observable Universe", spherical and with a radius equal to the life span of the Universe, luminous objects over 15 billion years old are too far away for their light ever to reach us.[7]

In 1929 Edwin Powell Hubble (1889-1953) published his claim that the radial velocities [8] of galaxies are proportional to their distance from Earth. The red shift of a galaxy is a measure of its radial velocity, and it can be measured using a spectrograph to determine the Doppler shift.[9] Hubble's 1929 data showed a direct correlation between the distance of the observed stars and the extent of its redshift—the further away they were, the faster they were moving away. Hubble, however, did not believe that the red shift was proof of expansion, favouring, instead, the model that there was in fact no actual expansion and the observed red shift "represents a hitherto unrecognized principle of nature." [10] Hubble’s data and calculations indicated the age of the Universe at 2 Gyr (2 billion years). At that time it was commonly known that the age of the Universe was in fact much greater than 2 Gyr so Hubble’s calculations were criticised for being incorrect and this criticism largely supported the Steady State Theory. Later it became apparent that Hubble had not correctly distinguished between some star types (Cepheid variables) and he had mistaken H II regions[11] for stars in some galaxies leading him to some incorrect conclusions. With recalculated H0 (Hubble Constant) of about 71 km/sec/Mpc (+/-3.5 km)[12], 1/ H0 is 14 Gyr and is consistent with the current calculations of the age of the universe of 13.7 Gyr (+/-0.2 Gyr.[13][14]

Cosmic microwave background radiation has proven to be one of the most crucial aspects in the Big Bang Theory and a major contradiction to the Steady State Theory. Ironically, originators of the two theories did not address this phenomenon and it was discovered by researchers who were not aware of its significance to cosmology.[15][16]

Isomorphic and blackbody nature of CMB

Data collected by COBE provided some of the most compelling evidence for the Big Bang Theory: Cosmic microwave background radiation (CMB) has the same temperature in all directions. One explanation of this is that the early universe was hot, ionised plasma that was too opaque to allow photons emission. About 300,000 years after the universe originated, it had cooled enough to form transparent gas of neutral atoms at which point the photons began their journey outward in a straight-line. It is thus this moment when the photons began to move away from the early universe that was recorded by COBE and later by WMAP. This is why it is believed that the universe was of a uniform temperature, to one part in 100,000, at approximately 300,000 years of age. This is one of the primary reasons why the universe is believed to have a point of origin in time and is not eternal.[5]

"Homogeneity" or isomorphism under translation means the universe is the same in all locations. In other words, no matter which location one observes, the locations look the same.[17][18]

"Isotropy" or isomorphism under rotation means the universe is the same in all directions. No matter from which point observations are made, there is no distinctive variation that would indicate directions such as we understand something like a North Pole or a South Pole.[17][18]

CMB radiation has a blackbody spectrum, which is produced by isothermal, opaque and non-reflecting objects. This can be demonstrated by using a hollow sphere with non-reflective interior surfaces with light shone into the cavity through a pin hole in the sphere. The light is absorbed inside the sphere and the thermal energy is eventually reflected back out of the pin hole, in effect, the black body absorbing the visible light and radiating thermal energy. The interior of the cavity remains dark throughout.

Essentially the period just prior to the Big Bang the universe was a blackbody, completely opaque, and isothermal (no temperature variation within the confines of the universe) with the result that the CMB spectrum is blackbody spectrum. This was a blow to the Steady State Theory because it clearly demonstrated a distinctly different environment from what we observe in the cosmos today.[15][16]

Variation of TCMB with redshift

Deuterium, 3He, 4He, and 7Li abundances

The Big Bang Theory accounts for the abundant distribution of the light nuclear isotopes hydrogen, deuterium, helium-3, helium- 4, and lithium-7. Heavier elements were synthesised some time later within stars which then ejected the heavier elements into interstellar spaces.[5]

The Big Bang has been posited as the beginning of the cosmos, that it all began with the Big Bang. The traditional theory has since been augmented by the Cosmic Inflation Theory because there are problems in dealing with the events and state of things prior to the Big Bang. Another answer is that the Big Bang is one of a series or cyclic Big Bangs that create the universe over and over and have done so infinitely. One approach to this is the ekpyrotic cyclic model posited by a number of physicist in the early 21st century, notably Justin Khoury, Burt A. Ovrut, Paul J. Steinhardt and Nei Turok. The ekpyrotic universe is begun by the collision of what have been termed parallel universe or 'branes" that begin the process anew each time they collide.[19][20][21][22][23][24]