This article is about Jupiter (planet). For other uses of the term Jupiter, please see Jupiter (disambiguation).

Jupiter is the fifth planet from the Sun and the largest in the Solar system. It is a gas giant (also known as the Jovian planet). 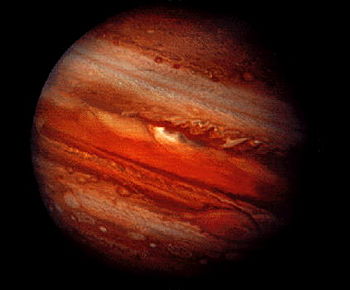 Jupiter is classified as a planet by the International Astronomical Union for meeting the following criteria:[1]

Jupiter is a little more than five times further away from the Sun than Earth (5.2 AU) and is the most massive of the planets with a total mass of about 318 times that of Earth (318 Earth masses). Its total mass is about 2.5 times all the other planets combined. See Benchmark quantities for more perspective about Jupiter's mass.

It is composed largely of hydrogen and helium. Jupiter's strong internal heat creates a number of semi-permanent features in its atmosphere, such as cloud bands and the Great Red Spot. 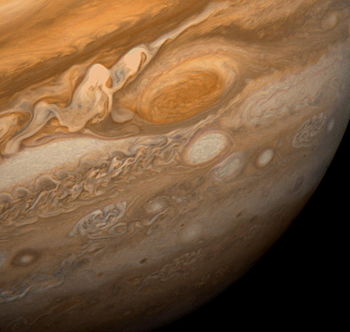 Jupiter's Great Red Spot is believed to be a giant hurricane rotating within the planet clouds. The first recorded observation was made by Italian-French astronomer Jean-Dominique Cassini in 1655. Three hundred years later it is still active. The spot is a cold, high-pressure area, 2 to 3 times the diameter of Earth. Its outer edges make a complete rotation in a counter clockwise motion about once every six days.[3]

The red spot rises about 8 km above the surrounding clouds. Its red colour is a mystery but current theories posit that it may be caused by material dredged up from below the cloud tops.[4]

Jupiter shows a number of other storms that are much smaller than the Great Red Spot. However, in June of 2000, a number of these smaller storms were seen to coalesce and form a larger storm center. The storm, labelled Oval BA (aka Red Spot Jr.) has since developed a reddish colour and looks very much like the Great Red Spot though much smaller.[4]

Jupiter has a rotational period (a complete rotation on its axis) of 9.842 hours and a polar tilt of 3°.[5]

Jupiter has 63 satellites, of which 50 have been given official names. Most of the recently discovered moons orbit Jupiter in a retrograde direction, which suggests that they are captured objects, not native to the Jovian satellite system.[7] The four largest are Ganymede, Callisto, Io and Europa. They show similarities to the terrestrial planets, such as volcanism and internal heating.[8] Ganymede is the largest satellite in the Solar System, and is larger than Mercury.

Ganymede, Callisto, Io, and Europa have an important place in the history of science. At the time they were discovered in 1610 by Galileo Galilei (using a telescope of his own design), Ptolemy’s geocentric (Earth-centered) view of the universe prevailed. Then, Johannes Kepler confirmed the observations a short time later.

Named by Galileo the Medician Stars after his benefactor Cosimo Medici II, they are collectively referred to as the Galiean satellites (after their discoverer Galileo).[9]