Nicolaus Copernicus (Polish name: Mikołaj Kopernik) 1473–1543 was a sixteenth century astronomer and propounder of the heliocentric system, a planetary system with the sun and not the earth in the center. His name is synonymous with scientific discovery. 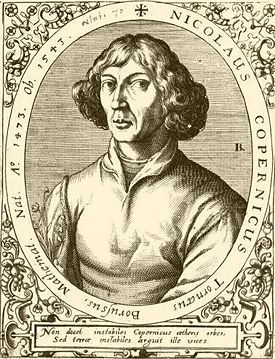 Nicolaus was born in Toruń on 19 February 1473 and died in Frombork on 24 May 1543. The cities of birth and death of Copernicus are now Polish, but were part of German speaking East Prussia during the days of Copernicus. In German the cities are called Thorn and Frauenburg. For the largest part of his life Copernicus worked and lived in Frombork, in the east of Poland at the Baltic Sea. This city is the seat of the diocese Warnia (in German Ermland). Although Copernicus was not ordained, he made his living as canon of this diocese and lived the life of a Roman Catholic priest.

At an early age Nicolaus showed much interest in astronomy, yet he made the sensible choice of studying law and medicine, two professions that obviously gave him a greater chance of finding a decent job than astronomy would. After three years of study (1491–1494), he received a bachelor's degree at the Jagiellonian University in Cracow and then went on to earn two master's degrees in Italy, one in Bologna and one in medicine at Padua. Copernicus stayed in Italy from 1496 until about 1503. He received a doctorate in canonical law at the university of Ferrara in 1503.

Educated in Padua and Ferrara in medicine and law, Copernicus returned to Prussia to practice medicine full-time and carry out astronomical studies at his leisure. He gained prominence both as a physician and astronomer, and engaged in political, administrative, and literary activities as well. His wide area of interests and work are illustrative of the new type of Renaissance man, the generalist and socially active humanist, and also indicate the unique development of Prussian humanism. The Prussian humanists, unlike their Italian counterparts, did not have patrons and had to depend on employment and support from friends to sustain their work. Often isolated from other scholars, the Prussian humanists nevertheless carried out important work and made significant intellectual contributions.[1]

It is likely that Copernicus, during his stay in Italy, got acquainted with the heliocentric model of Aristarchus (ca. 310–230 BC). There is an early (1514) manuscript of Copernicus in which he posits that the earth orbits the sun in one year time and that the retrograde motions of the planets are only apparent, that is, are caused by observation from a moving earth. Further he assumed that the phenomena of sunset and sunrise are caused by a rotation of the earth around its own axis. In brief, Copernicus assumed that the earth does not take a special position in the cosmos, but is just one of the six planets that orbit the sun (the discoveries of Uranus and Neptune were a few hundred years later). The same point of view caused a historic conflict between Galileo Galilei and the Roman Catholic church, almost a century later, because the church believed that the Bible claims a special place for the earth in the universe.

The remaining part of his life Copernicus worked on the quantitative founding of his qualitative ideas of 1514. However, because he could not free himself from the Aristotelian idea that the planetary orbits must be perfect, that is, circles, his astronomical predictions were not much more accurate than those of Ptolemy. Only after Johannes Kepler had unchained himself from the medieval awe for Aristotle, and assumed elliptic orbits, it became possible to surpass the accuracy of Ptolemy. Near the end of his life Copernicus could bring himself finally to publish his results. This decisison was taken under much pressure of his young admirer Rheticus, who believed strongly in Copernicus' ideas.

Copernicus' results were expounded in a book, De revolutionibus orbium coelestium (about the revolution of the celestial spheres). Copernicus saw the first printed edition shortly before he died in 1543. The first edition was published in Nuremberg in 1543. Traditionally, that year is seen as the beginning of the scientific revolution. The debate about the earth revolving around the sun in reality, however, started only after 1600, when the first and second (1566) editions of Copernicus's work were already sold out. In 1616 De Revolutionibus was placed on the Church's Index of Prohibited Books. In 1617 the third edition was produced in Amsterdam, which has since that time been seen as an improvement compared with the preceding editions. In 1616 edition of De Revolutionibus remained the standard edition until and even after the fourth edition was published in 1854. Nevertheless, the third edition has hardly been subject of study so far. The title of the 1617 edition reads Astronomia Instaurata. The editor, who - according to the title page - "restored" Copernicus's work, was a professor from Groningen, Nicolaus Mulerius (1564-1630). Mulerius himself was not a supporter of the heliocentric worldview, but in humanist tradition he thought the work should be corrected and made available for scholars. However, many errors from the first editions are not corrected in the third. The positive impression Astronomia Instaurata has made on contemporaries and on later historians is attributed to improvements in typography, illustrations, and reader friendliness. For this, Amsterdam printer Willem Jansz Blaeu (1571-1638) was responsible. He was one of the first Copernicans in the Dutch Republic. Because of his knowledge as an astronomer and his possibilities as a printer, Blaeu could actively influence the presentation and dissemination of Copernicus's ideas.[2]

Labeled "the book nobody read" by Arthur Koestler in The Sleepwalkers: A History of Man's Changing Vision of the Universe (1959), De Revolutionibus (1543) has had a far greater impact than historically assumed, especially in 16th-century Europe.

Like many scholars and scientists of that era, Danish astronomer Tycho Brahe (1546-1601) admired the achievements of Copernicus even while rejecting his heliocentrism. Brahe tried to refute Copernicus's thesis on empirical grounds. He criticized Copernicus's observational practices and put forward his own investigative agenda for astronomy. This agenda focused on greater accuracy. However, it was difficult for Brahe to find mathematical fault with the Copernican hypothesis. The critique of the parameters of Copernicus's endeavor mainly served as a preface to Brahe's own exhaustive observations and nonheliocentric views. Brahe had a firm grasp of the arduous and slow nature of collecting empirical evidence, but was unable to shake the Copernican model.[3]

It sometimes stated that Copernicus work initiated a scientific revolution, be that as it may, in any case his work was the start of a revolution in astronomical thought. It must be stressed here that Copernicus did not replace the flat earth by a round earth, as is very often stated. The fact that the earth is a sphere was generally known among the literate since Hellenistic times (about 300 BC). It is perhaps no coincidence that Copernicus' revolution occurred in the first half of sixteenth century, because this was a time of many great changes: The fall of the Byzantine empire (1453), Columbus' discovery of the Americas (1492), the 95 theses of Luther on the church door of Wittenberg (1517), the coronation (1519) of Charles V to Holy Roman Emperor, etc.

Thomas S. Kuhn's The Copernican Revolution (1957) shaped subsequent views of Copernicus's role in the establishment of modern astronomy, and helped to "humanize" perceptions of the physical sciences. Equally important, despite important conceptual changes in the five intervening years, it functioned as a prelude to Kuhn's extraordinarily influential reinterpretation of how science progresses by rejecting standard paradigms in The Structure of Scientific Revolutions (1962).

The 1873 quadricentennial of Copernicus's birth was marked by German efforts to make Copernicus a German and by the severe restrictions placed on Polish celebrations by Russian authorities. In 1943, the quadricentennial celebration of his death was both an occasion for the Nazis to emphasize the idea that Copernicus was German and an occasion for the free Polish community to exploit the astronomer as a rallying symbol for Polish independence. The 1973 quinquecentennial celebrations were marked by disagreements on the appropriate venue for the commemoration, to be sponsored by the International Astronomical Union, and on other logistical issues.[4]