The Electromagnetic Spectrum is the name given to the range of electromagnetic waves covering all frequencies and wavelengths. It includes radio and television transmission, Microwaves, Infrared, visible light, Ultraviolet, X-rays, and Gamma rays. The relatively new (since the 1990s) technology of terahertz (THz) radiation can be thought of as occupying a gap between infrared radiation and microwaves, covering frequencies of roughly 0.1 to 10 THz. 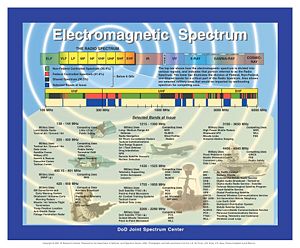