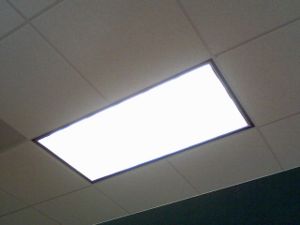 Light, like all electromagnetic radiation, consists of photons. Photons have very specific properties, such as wavelength and frequency, and those observable properties determine the qualitative properties, such as color, that are perceived by the eye. Intensity is not a property of the photons, but rather their number.

Light exhibits behavior characteristic of both waves and particles. Until recently it was deemed impossible to detect both the particle nature and the wave nature of light at the same time, as they were believed to be two representations of the same phenomenon. This has in recent years been improved and the dual nature of light (wave and particle) has now solidly been proven in combined experiments.

The five behaviors of light can generally be classified as either particle or waveform behaviors. The particle-like behavior can be demonstrated photoelectrically and plasmonically, and the waveform-like behaviors include refraction, interference, diffraction, and reflection. 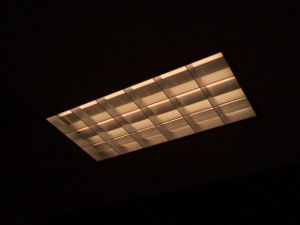 In a photoelectric environment, large quantities of photons (which carry a fixed amount of energy) interact with the electron population of a solid. Based on the type of solid, either a reduction or increase in the displacement of electrons can occur. The energy of photons required to displace those electrons has to exceed a certain amount. If electrons are displaced, the extra energy will be transferred kinetic energy of the electrons. If a greater light intensity exists, more photons will interact with more electrons. The speed of the electrons is a function of the type of solid and wavelength of light but independent of the brightness of the light. There is a direct correlation between the energy of those photons and the frequency of the light used. It should be noted however, that not all electrons can be displaced. 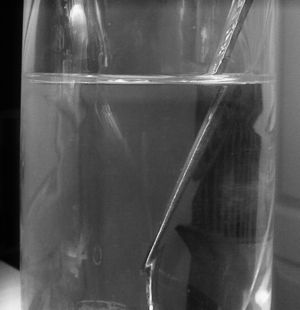 Refraction causes objects to appear distorted; in this case a spoon in a glass of water appears to be "broken" near the top.

Interference occurs when two or more waveforms of light interact with each other. This phenomenon can be classified into two types: constructive, and destructive.

Diffraction is the visual appearance of light changing shape in accordance with obstacles in its direct path. When light is projected to a plane that has only a small opening for light to pass through, the location at which light is allowed to continue can be identified as a single point source of light. This single point does not limit the projection to only the shape of the point; rather it is re-emitted in the widest possible scope.

Reflection happens when light is transmitted to a medium, absorbed, and re-emitted with the same amount of energy. Reflection can happen in one of two ways: specular, and scattered. Specular reflection occurs when light is projected onto a smooth surface at a definite angle. Scattered reflection is the reflection of light at various different angles.

Light is seen as being quantized, i.e. containing discrete packages of energy as reflected by one particular wavelength emitted. These quantized packages are called photons. Any ray of light contains numerous photons, each of which has its own energy and therefore wavelength. However, most sources of light will generate photons of various frequencies, an important exception being monochromatic light sources, such as lasers.