Diffraction is a physical phenomenon due to which waves passing through small openings will tend to 'bend' towards the edges. Diffraction applies to virtually all kinds of waves including sound, light, and other electromagnetic waves (such as radio waves). The phenomenon is particularly interesting because of the interference patterns that arise from such waves. It puts a limit to the theoretical resolution of optical systems. It is also a convincing piece of evidence for the wave nature of light.

The simplest example of diffraction is the single slit experiment. A laser is set up pointing against a small rectangular slit in an otherwise opaque screen. Some distance behind the slit is a screen on which the diffraction pattern can be observed. The slit has a width b and a height which is large in comparison to b, and the components are sufficiently far away from each other that the waves are approximately plane (straight wavefronts). On the screen we observe a pattern of 'dots', with an intense central maximum in the middle and auxiliary maxima on both sides of it, intensity rapidly decreasing as we move away from the centre. We note that the central maximum is twice as wide as the others. If the width b of the slit is made smaller, the pattern will spread out in the horizontal direction. After application of the principle of superposition, we arrive at the following formula for the n:th minimum:

Where b is the width of the slit, θ is the angle made with the optical axis (the straight line through the slit), n is a positive whole number, and λ is the wavelength of the diffracted wave. A detailed derivation of the forumla is available below. We also obtain an expression for the intensity in a point at angle θ: 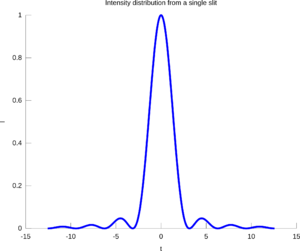 (CC) Diagram: Johan A. Förberg
The intensity pattern from a single slit.

(CC) Diagram: Johan A. Förberg
Huygen's principle applied to a wave passing a small opening. The blue lines are wavefronts.

Waves obey Huygen's principle, which states that all points on a wave front can be seen as sources for new, circular elementary waves. This implies that waves will 'bend around' objects that are in their way, and will also bend around corners that they pass. Think of a wave in a water surface, and how it behaves when meeting a pole that rests in the water. It is a fact that the amount of bending varies with the wavelength, such that longer wavelengths bend more strongly. For that reason, your voice appears darker to you than to others, because more of the lower sounds (longer wavelengths) will bend around your head and reach your ears. 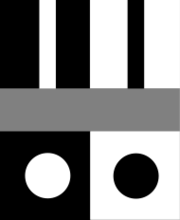 If P and P′ are complimentary patterns, Babinet's principle states that the intensity distributions from these are identical. The reasoning behind this is that complimentary patterns together add up to a completely opaque pattern. This means that the diffracted waves from these patterns must add up to zero, implying that waves from these patterns have equal amplitude in each point, but are completely out of phase. The phase of a wave is not visible in an intensity distribution, why the distributions are equal.

Scientists were initially sceptical about this law, since it predicts a bright spot in the middle of the diffraction pattern from, say, a coin of the correct size. This spot was later observed. It matters, however that the pattern is of the correct size depending on the wavelength of the waves used.

Resolution and the Rayleigh criterion

In dealing with optical systems, it is useful to find a limiting case of when a system can just resolve two distinct points. This is given by the Rayleigh criterion. We know that slits and circular openings will cause light to diffract. Since most optical systems consist of circular lenses, we can assume that as a general case. If furthermore we disregard all but the central maxima of diffraction patterns (since the auxiliary maxima are of comparatively small intensity), we will be dealing with two 'spots', one from each point we are trying to resolve. These are called the Airy discs of the points. It turns out that the smallest separation that still allows us to resolve two points A and B is that which causes the center of Airy disc B to coincide with the first minimum from A.

Mathematical interpretation of the Rayleigh criterion

Our goal is to find a mathematical formulation of the Rayleigh criterion for resolution. We will limit ourselves to optical systems that are in a vacuum. We have a formula for the first minimum from A:

Applying the small angle approximation that

, we get the criterion:

for the minimum separation h between two objects at a distance

from the lens-plane of an optical system just barely allowing the objects to be resolved. An alternative formulation is:

for the angular separation of the two objects, independent of the distances involved.

Suppose that we want to find the maximum theoretical resolution of a digital camera. The camera has a lens with a focal length of 100 mm, and an aperture (circular opening) of

mm . We are considering only visible light, why we assume a wavelength of 550 nm (corresponding to green light, in the middle of the visible spectrum). We are now ready to find the maximum resolution:

Inserting values into the formula, we find the minimum angular separation to be 2.684 × 10-5 radians. Since modern digital cameras use CCD devices with small photosites or 'pixels' to capture images, we can make another approximation. For two objects to be resolved by a digital camera, their images must end up at least one photosite apart. Assuming a distance of 50 mm from the lens to the image sensor, we calculate:

giving a length separation on the sensor of 673.6 nm. We are now interested in the maximum resolution of such a sensor. Most professional cameras take photographs in the 3:2 format (pictures are half again as wide as they are high). One common sensor size is the APS-C format, which is about 25.1 mm wide and 16.7 mm high. Thus, we calculate the maximum amount n of photosites in a row of 25.1 mm, giving a separation of 673.6 nm:

which gives a total of 37,000 photosites on a row. Given that the sensor is in a 3:2 format, we calculate the total number of photosites as 925,000,000. In camera manufacturer terminology, this is the equivalent of 925 megapixels.

This is of course only the theoretical maximum resolution. In reality, there are limits due to lens quality, sensor noise and refraction in the air. For more common cameras without exchangeable lenses, the apertures are also much smaller, leading to stronger diffraction. It is a fact, however, that no optical system with an aperture of 25 mm can have a higher resolution. 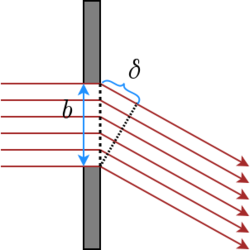 and a height that is large enough that vertical diffraction can be neglected. Pointing directly at the slit is a laser sending out parallel rays with wavelength 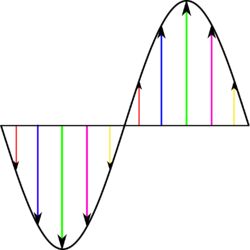 (CC) Diagram: Johan A. Förberg
In a phase difference of a wavelength, there are ray-pairs such that their magnitudes are equal and opposite, and thus add up to zero.

We are thus looking for the angle

where this path difference (and thus phase difference) causes complete destructive interference. We note that in a phase difference of a full period, we can construct ray-pairs which have the exact opposite phase and equal amplitude. For each ray with a positive amplitude

. This leads to the conclusion that when the phase difference

equals a whole number of wavelengths, there will be total destructive interference. Thus, it seems clear that the path difference

we are looking for is a whole number of wavelengths. Hence, we are ready to formulate a criterion for single-slit diffraction minima:

The phenomenon of diffraction can also be understood through the principles of quantum mechanics. Heisenberg's uncertainty principle states that:

Say that we want to pinpoint the location of the beam of light emitted by a laser. We set up a single slit with a width b and a height that is large in comparison with the wavelength of the laser. In order to pass, the light must go somewhere through the slit. Thus, we think that we have pinpointed the location of the light to within b/2 of the center of the slit. Passing through the slit however, the light will spread out and there is no way to predict at what angle a certain photon will go. All we can predict is the probability of photons to go a certain direction, which will generate an even intensity distribution for a large number of photons. Furthermore, the light will spread out even more with smaller widths b (larger certainty in position), which is exactly what Heisenberg predicts.