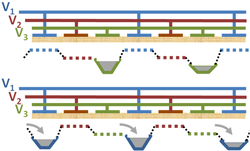 (PD) Image: John R. Brews
A three-phase CCD. Top: during illumination pools of electrons are created in potential "buckets" in response to the light incident in the vicinity of the buckets; Bottom: the voltages on the three sets of electrodes are altered, moving the potential buckets to the right, carrying the charge with them.

The charge-coupled device or CCD is a solid-state, image-capture device based upon the field effect. An example implementation called the three-phase CCD is shown in the figure, named after the three voltage levels used in its operation, labeled V1, V2, V3.

The operation of this device is as follows. The light forming an image on the surface of the device creates electrons through the photoelectric effect and in each pixel these electrons are collected under one of three adjacent electrodes biased to produce a potential well under it, called a "bucket". A two-dimensional array of these buckets collect electrons, forming a sampled approximation to the image with a resolution determined by the grid forming the bucket array. The buckets are translated with their contents by a sequential shift in the voltages on the three electrode arrays. In the lower frame of the picture the buckets in the top frame are moved to the right by lowering the potential in the cells to the right, and raising the potential of the starting bucket so its contents spill into the new bucket on its right. At the same time the potential to the left of the starting bucket is raised to prevent the bucket from emptying in the reverse direction.

The buckets are transferred to the periphery of the CCD where their contents are detected and converted to a digital signal using an A/D converter. The transfer of charge in this device is a simplified version of the mechanism used in the bucket brigade device (BBD) invented in 1968 by F. Sangster and K. Teer of the Philips Research Laboratories and used as a delay line.[1][2]

The CCD was invented at Bell Laboratories in 1969 by George E Smith and WS Boyle, who received the Nobel Prize in Physics for this work in 2009.