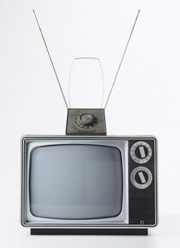 A 1970's-era television receiver, with "rabbit ears" antennae for receiving VHF transmissions, and a loop for UHF signals

Television (also, informally, "TV" and "telly") is the electronic transmission of moving pictures. The word "television" literally means "far sight"; it was formed by combining the Greek word τῆλε ("tele", or "far") with the Latin word visio-n ("sight", from video, vis- to see) — this coinage follows the pattern of telegraph ("far writer") and telephone ("far talker"). A parallel construction may be found in German, where it is known as "fernsehen" or "far-seer." In general usage, the meaning of "television" has been expanded to also refer to receivers, and to video in conventional broadcast as well as cable and satellite signals.The word is also used to describe, in broad terms, the content of television programming generally; that is how it is used here.

The content of television has evolved considerably since the earliest broadcasts in the late 1920's in Britain. The evolution of the medium can best be understood by looking at the broad historical trends, which themselves were often driven by technical innovations, such as higher definition signals, color, and an increased number of available channels and networks.

In its earliest days, there was a good deal of incertainty as to what exactly what sort of material was suitable for broadcasts. The BBC's earliest broadcasts using the Baird system tended to focus on music-hall performers, singers, and novelty acts. A typical daily program, from the week of December 4th 1930, included the following:

As the earliest regularly scheduled broadcasts of television in the world, this Baird programming is quite remarkable. Most of the acts performed for only a few minutes each, as the BBC had only allocated a half-hour at morning and at night. There are, in fact, surviving home recordings of these broadcasts; using a "Silvatone" home-recording deck, a viewer in 1933 had recorded a number of snippets of the BBC signal, including a segment featuring the "Paramount Astoria Girls," a popular dance troupe of the day. These recordings have been restored by Scottish engineer Donald McLean, and give a unique window into early television, as they are the first recordings ever made of broadcast television.[2] It is remarkable what the producers were able to accomplish with their heavy, fixed camera and sharply limited camera angle; the full recording shows faces popping out from behind a curtain, followed by the entry of the dancing girls, over which the camera was slowly panned (the only motion then possible; see image at left). Due to the fact that the Silvatone disc could record only one channel, there is no sound. In addition to live programming, cinema films were regularly shown, as Baird's had developed an early mechanical-scanning telecine process in 1929.

The BBC, in anticipation of a new higher-definition system, ended regularly scheduled 30-line transmissions in 1934. 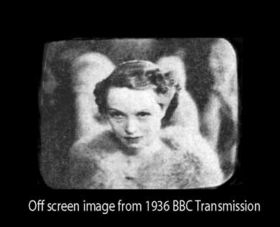 On November 2, 1936, the BBC launched its new higher-definition broadcasts from new studios at Alexandra Palace. Originally, broadcasts alternated between the Baird process, which used cinema cameras and "intermediate film" processing, which scanned freshly-developed film while still wet, and the all-electronic EMI-Marconi system, which used the Emitron tube (both were received electronically and displayed on Cathode-Ray tubes). Both processes suffered from some technical problems at the start, but the BBC eventually decided in favor of the EMI system; all broadcasts using Baird's system ceased early in 1937. The broadcasts were made from specially-designed studios at Alexandra Palace, and employed a new higher-definition 405-line broadcast standard as called for in the report of the Selsdon Committee to the BBC. The first announcers were Leslie Mitchell, Elizabeth Cowell, and Jasmine Bligh, and the first hour's program (repeated via both the Baird and the EMI systems) was as follows:

The BBC television service was abruptly suspended on the eve of Word War II. 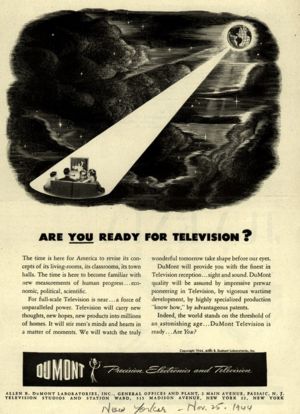 The DuMont Television Network spent heavily on advertisements such as this, which promoted television as the medium of the future, with its viewers as pioneers of a new world.

Both the UK and the US limited television broadcasting during the wartime years. In the UK, broadcasts were stopped entirely, while in the US, though limited broadcasts continued, no new television receivers could be manufactured or sold. The immediate post-war period was a heady one in both countries, though US growth was to be the fastest. The UK continued its pre-war model of using licensing fees for receivers, such that the BBC transmissions had no commercial content, whereas in the US, the sponsorship model used for radio quickly became the standard for television as well.

One early pioneer was the DuMont Network, a subsidiary of DuMont Television Laboratories, an early television manufacturer, which launched in 1946 as the first television-only network. In radio, most shows had had sole sponsors, who as a result exercised enormous control over content; DuMont was a pioneer of the model in which each individual program had multiple sponsors, freeing the producers of its shows from the veto of a single sponsor. A characteristic array of DuMont programming included stage entertainers, news, variety shows, televised films, and genre dramas; the following is a characteristic sample (dates of broadcast in parentheses) 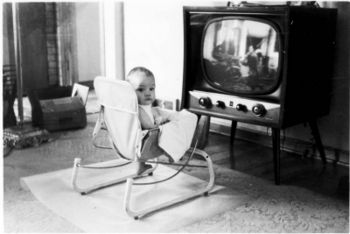 A typical baby-boomer baby parked in front of the family's television set, circa 1961

The DuMont network had collapsed by 1956. CBS, which had already built a large radio network, quickly became the dominant player in the market. At the same time, NBC, particularly through its promulgation of the first widely-successful color television technology, became a major force. By the late 1960's, in most major U.S. markets, each of the three networks had a local affliate broadcasting on the VHF bandwidth, gradually relegating the low budget independent shows to UHF.

Network "affiliates," agreed to broadcast the network's programs during the "prime time" hours or 8 to 11 p.m. weeknights; in return, they obtained both a share of national advertising revenue, as well as a smaller bloc of time allocated to their local advertisers. As a result, the shows produced by the three major networks captured an unprecedented share of the nationwide television audience, and as this share grew, so did advertising revenue.

In the 1980s, alternative broadcast technologies became available in the form of cable and satellite broadcasts. These were offered as subscription services on top of the existing over-the-air broadcasts. A new range of niche interest channels became available: in the United States, Ted Turner's CNN network broadcasted around-the-clock news (later players in this market include Fox News Channel and MSNBC; Sky News, BBC News 24, Euronews, Al-Jazeera and others used the model outside of the U.S.). MTV and the Cartoon Network made music, cartoons and entertainment for teens and children respectively available at any time. With these networks, new models of broadcast business became available. Premium subscription networks and pay-per-view broadcasts became available with sports, pornography and movies being the prime beneficiaries.

One of the uses to which the increased bandwidth provided by digital broadcast signals was put was the provision of high definition signals (HDTV). HD signals increased the number of visible lines of pixels from 480 to 720 or 1080. Computer monitors had already demonstrated the possibility of scaling monitors to display significantly more pixels than standard-definition televisions, but the impetus to shift up the spectrum was as much to do with standards and broadcasters as it was to do with technical ability.

The Internet, the low-cost of storage and the availability of a new range of personal video recording devices (PVRs) like the TiVo, as well as the rapidly multiplying number of channels being broadcast changed how television was being watched, matching up with changes in society. PVR devices enabled easy recording of television shows onto a hard drive, and most did so for a whole series, and predictively recording shows that would match the viewer's interest. Some of these devices enabled the skipping of advertising which caused consternation among broadcasters. Availability of high-speed broadband Internet services only increased the speed of change. Television shows were shunted around peer-to-peer networks like BitTorrent with adverts removed. Video blogs, podcasts and sites like YouTube enabled anyone to produce and publish amateur video, leading to many people consuming an increasing amount of amateur or semi-professional content complementing and competing with the existing commercial and national broadcasters. Broadcasters have responded by providing their own online services: Hulu, the BBC iPlayer, SkyPlayer, Joost and many others. The Internet has flattened television distribution. A show like Lost may be broadcast in the United States months before it is broadcast in Europe, now people anywhere can download (often through unsanctioned peer-to-peer networks) and watch shows at the point of first broadcast.

How television is watched has changed in other ways: people now have much more powerful handheld devices. MP3 players like the iPod as well as phones, handheld games consoles and other devices support watching downloaded or streamed content live on the devices. Many people in the Internet generation will grow up watching television on laptop or desktop computer screens rather than on televisions.