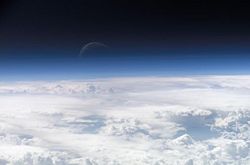 (PD) Photo: Courtesy of the Image Science & Analysis Laboratory, NASA Johnson Space Center
Atmospheric gases scatter blue light more than other wavelengths, giving the Earth a blue halo when seen from space at an altitude of 181 nautical miles (335 kilometres) above the Earth.

The Earth's atmosphere is an envelope of gas that surrounds the Earth and extends from the Earth's surface out thousands of kilometres, becoming increasingly thinner (less dense) with distance but always held in place by Earth's gravitational pull. The atmosphere contains the air we breathe and it holds clouds of moisture (water vapor) that become the water we drink. It protects us from meteors and harmful solar radiation and warms the Earth's surface by heat retention. In effect, the atmosphere is an envelope that protects all life on Earth.

The atmosphere is a mixture of gases we call "air". On a dry volume basis, it consists of about 78% nitrogen and 21% oxygen. The remainder of about 1% contains argon, carbon dioxide and very small amounts of other gases. The atmosphere is rarely, if ever, completely dry. Water vapor is almost always present up to about 4% of the total volume. In desert regions, when dry winds are blowing, water vapor in the air will be nearly zero. This climbs in other regions to about 3% on extremely hot and humid days. The upper limit, approaching 4%, is for tropical areas.

There is no definite boundary between the atmosphere and outer space. It slowly becomes less dense (i.e., more empty) and fades into the void of outer space.

Structure of the atmosphere

(PD) Drawing: NOAA and NWS
Structure of the atmosphere.[2]

As shown in the adjacent diagram, Earth's atmosphere has five primary layers, referred to as spheres. From the lowest to the highest layer, they are the Troposphere, Stratosphere, Mesosphere, Thermosphere and the Exosphere. The four boundaries between the primary layers, referred to as pauses, are the Tropopause, Stratopause, Mesopause and the Thermopause. In more detail:[2]

Stratosphere
From the Latin word "stratus" meaning spreading out. The stratosphere extends from the tropopause's height of 7 to 17 kilometres (4 to 11 miles) to a height of about 50 kilometres (31 miles) and contains about 19% of the atmospheric gases. The stratosphere experiences increasing temperature and solar radiation with height. It contains the ozone layer because the solar radiation is increasingly absorbed by oxygen molecules in the stratosphere, leading to the formation of ozone. The ozone layer resides in the lower portion of the stratosphere, though the thickness of the layer varies seasonally and geographically. Weather balloons can rise to about 40 kilometres (25 miles) before the difference between the pressure inside the balloon and the outside atmospheric pressure causes the balloons to expand to the point at which they burst.

Mesosphere
From the Greek word "μέσος" meaning middle. The mesosphere extends from stratopause's height of about 50 kilometres (31 miles) to a height of about 80 to 85 kilometres (50 to 53 miles). The gases continue to become less and less dense with height. As such, the effect of the warming by ultraviolet radiation also becomes less and less, leading to a decrease in temperature with height. On average, temperature decreases to as low as -100 °C at the mesopause. However, the gases in the mesosphere are still dense enough to slow down meteors hurtling into the atmosphere, where they burn up and leave fiery trails in the night sky.

Mesopause
The boundary between the mesosphere and the thermosphere. It is the coldest place on Earth, with a temperature as low as -120 °C at times.

Thermosphere
The thermosphere extends from the mesopause's height of 80 to 85 kilometres (50 to 53 miles) to a height of between 500 and 1000 kilometres (310 and 620 miles) and is referred to as the upper atmosphere. The gases of the thermosphere are increasingly less dense than in the mesosphere. As such, incoming high energy ultraviolet and x-ray radiation from the sun, absorbed by the molecules in this layer, results in the temperature increasing to as high as 2000 °C near the top of this layer. However, despite the high temperature, this layer of the atmosphere would still feel very cold to our skin because of the extremely low density of the air. The total amount of energy from the very few molecules in this layer is not enough to heat our skin. The International Space Station orbits in this layer, between 320 and 380 kilometers (200 and 235 miles) from the Earth's surface. The Kármán line, named after the physicist Theodore von Kármán, is in the thermosphere at an altitude of 100 kilometres (62 miles) above the Earth and is often referred to as the boundary between Earth's atmosphere and outer space.[9]

Thermopause
The boundary between the thermosphere and the exosphere.

Exosphere
Extends from the thermopause's height of 500 to 1000 kilometres (310 to 620 miles) up to a height of 10,000 kilometres (6,200 miles) above the Earth's surface. The exosphere is the outermost layer of the atmosphere and it is in this layer that our man-made satellites orbit the Earth. The density of the exosphere is so low that particles within it (atoms, molecules, or ions) do not collide. As a result, particles in the exosphere can escape altogether from Earth's atmosphere into the void of space.

There are two other regions of the atmosphere that deserve discussion, one is the Ionosphere and the other is the Ozone layer:

Ionosphere
Solar radiation causes ionization of the molecules in a region of the atmosphere that extends from about 50 kilometers up to about 1100 kilometers above the Earth. That region is called the ionosphere and most of it is in the thermosphere, although it overlaps into the exosphere above the thermosphere and the mesosphere below the thermosphere. It is of importance because certain regions of the ionosphere make long distance radio communication possible by reflecting the radio waves back to Earth. It is also home to auroras. The lower edge of auroras occur at an altitude of about 100 kilometres (about the same height as the Kármán line) and may extend up to an altitude of 480 kilometres.[10]

Ozone Layer
Though part of the stratosphere, the physical and chemical composition of the ozone layer is far different from that of the stratosphere. Ozone (O3) in the Earth's stratosphere is created by ultraviolet light striking oxygen molecules containing two oxygen atoms (O2), splitting them into individual oxygen atoms (atomic oxygen). The atomic oxygen then combines with unbroken O2 to create O3, the ozone. Ozone is unstable (although long-lived in the stratosphere) and when ultraviolet light hits ozone, it splits into a molecule of O2 and an atom of atomic oxygen thus creating a continuing process called the ozone-oxygen cycle. This occurs in the ozone layer, the region from about 10 to 50 kilometres (6 to 31 miles) above Earth's surface. About 90% of the ozone in the Earth's atmosphere is contained in the stratosphere. Ozone concentrations are greatest between the heights of about 20 and 40 kilometres above the Earth's surface, where they range from about 2 to 8 parts per million by volume.

Sometimes the Earth's atmosphere is defined as consisting of these two parts:[11][12]

Homosphere
Defined as that part of the atmosphere where the chemical composition of the atmosphere is constant. The homosphere extends from the Earth's surface to about 80 kilometres (50 miles) and includes the troposphere, the mesosphere and the stratosphere.

Pressure profile of the atmosphere

Earth's atmospheric pressure at sea level is commonly taken to be 101,325 pascals and it decreases with increasing altitude. There are two equations for calculating the atmospheric pressure at any given altitude up to 86 kilometres (53 miles). Equation 1 is used when the lapse rate[13] is not equal to zero and equation 2 is used when the lapse rate equals zero:[14] The two equations are valid for seven different altitude regions of the Earth's atmosphere by using the designated base values (from the adjacent table) for

For example, the atmospheric pressure at an altitude of 10,000 metres is obtained as 26,437 pascals by using Equation 1 and the appropriate base values for the altitude region number 1.

The adjacent table lists the concentration of 14 gases present in filtered dry air. Two of the gases, nitrogen and oxygen make up 99.03 percent of the clean, dry air. The other listed gases total to 0.97 percent.

Earth was formed 4.54 billion years ago (within an uncertainty of 1%) with a primordial gaseous atmosphere surrounding a very dense, molten core.[17][18][19][20] About 4.4 billion year ago, as the Earth began to cool and form a crust, the primordial atmosphere was stripped away by a combination of heat from that molten crust, periods of intense solar activity, and the solar wind.

As the crust formed, volcanic activity became incessant. The outgassing from the volcanoes replaced the primordial atmosphere with what is referred to as the second atmosphere that most probably consisted of water vapor (steam), nitrogen, methane, ammonia, carbon monoxide, carbon dioxide, hydrogen sulfide, sulfur dioxide, and other gases — a mixture much like that emitted from volcanoes today. The dominant gases of the secondary atmosphere were water vapor, carbon dioxide and nitrogen. There was very little free oxygen (if any) in that secondary atmosphere and it would have been poisonous for almost all modern life forms.

At about 4.0 billion years ago, cooling of the Earth and its atmosphere caused precipitation of the atmospheric water vapor as rainfall and subsequently the development of the Earth's oceans. Most of the atmospheric carbon dioxide was dissolved in the oceans and then precipitated out as solid carbonates. By about 3.5 billion years ago, life emerged in the oceans in the form of single-celled microorganisms (referred to as archaea).

By about 2.7 billion year ago, the archaea were joined by microorganisms called cyanobacteria which were the first organisms to produce free gaseous oxygen. It took a long time for the cyanobacteria to get started but between 2.2 and 2.7 billion years ago, the Earth's atmosphere had been converted from an oxygen-lacking (anoxic) atmosphere to an oxygen-containing (oxic) atmosphere. This is often referred to as the Great Oxidation and it resulted in the mass extinction of any life forms that may have existed during the era of the anoxic atmosphere. Between then and now, the gaseous atmosphere was converted to its modern composition as presented and discussed in the previous section of this article.

The evolution of the Earth's modern oxygen-containing atmosphere (referred to as the third atmosphere) led to the formation of the ozone layer which protects life on earth by blocking the harmful incoming ultraviolet solar radiation.