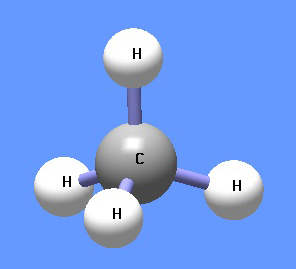 Methane (CH4) is under normal temperature and pressure a colorless and odorless gas, also known as marsh gas. It is lighter than air, boils at −161.4 0C and solidifies at −184 0C. It is highly combustible and forms an explosive mixture with air. The gas is formed by decomposition of plant and animal matter and is the principal component of natural gas and fire damp in coal mines. Methane is used in the heating of homes and the industrial preparation of hydrogen. In chemistry, it is the first member of a series of saturated hydrocarbons, the alkanes. Methane is a potent greenhouse gas. Large deposits of methane are believed to be contained clathrate hydrates along ocean floors as well as under permafrost, far exceeding reserves of conventional natural gas.[1] Global warming could release this gas and thus enhance considerably the greenhouse effect.