This article is about Density (chemistry). For other uses of the term Density, please see Density (disambiguation).

Density (symbol: ρ - Greek: rho) is a measure of mass per unit of volume. The higher an object's density, the higher its mass per volume. The density of an object equals its total mass divided by its total volume. An object made of a denser material (such as iron) will have less volume than an equal mass of some less dense substance (such as water). The SI unit of density is the kilogram per cubic metre (kg/m3):

ρ is the object's density (measured in kilograms per cubic metre)

m is the object's total mass (measured in kilograms)

V is the object's total volume (measured in cubic metres)

Under specified conditions of temperature and pressure, the density of a fluid is defined as described above. However, the density of a solid material can be defined in several ways. Porous or granular materials have a density of the solid material, as well as a bulk density, which can be variable. For example, if you gently fill a container with sand, and divide the mass of sand by the container volume you get a value termed loose bulk density. If you took this same container and tapped on it repeatedly, allowing the sand to settle and pack together, and then calculate the results, you get a value termed tapped or packed bulk density. Tapped bulk density is always greater than or equal to loose bulk density. In both types of bulk density, some of the volume is taken up by the spaces between the grains of sand. The density of the sand grains, exclusive of the air between the grains, will be higher than the bulk density.

In candy making, density is affected by the melting and cooling processes. Loose granular sugar, like sand, contains a lot of air and is not tightly packed, but when it has melted and starts to boil, the sugar loses its granularity and some entrained air and becomes a fluid. When molded to make a smaller, compacted shape, the syrup tightens up and loses more air. As it cools, it contracts and gains moisture, making the already heavy candy even more dense.

For a homogeneous solid object, the mass divided by the volume gives the density. The mass is normally measured with an appropriate weighing scale or balance and the volume may be measured directly (from the geometry of the object) or by the displacement of a liquid.

Another instrument used to determine the density of a liquid or a gas is the digital density meter, based on the oscillating U-tube principle.

One of the many statements attributed to the Archimedes principle is that an object immersed in a fluid apparently loses weight by an amount equal to the weight of the fluid displaced.[1][2][3] That principle makes it possible to determine of the density of a solid object that is denser than water and is so irregular in shape that its volume cannot be measured directly.

, is measured. Next, the weight of the object while submerged in water,

, is measured. Then the submerged object is removed from the water, the excess surface water is removed and the wet weight in air,

, is measured.[4] The density of the object,

, is then obtained from:

and the volumetric porosity fraction,

can be obtained from:

For some crystalline materials, density can be calculated using this equation which is based the molecular mass of the material and on information provided by x-ray crystallography:

N is the number of ions, atoms or molecules in a unit cell

L is Loschmidt or Avogadro's constant
a, b, c are the lattice parameters

This equation holds only for crystal systems in which the angles between the crystal axes are ninety degrees, that is, for cubic, tetragonal, and orthorhombic systems. For crystals of lower symmetry the volume of the unit cell is no longer a × b × c, but must be generalized. 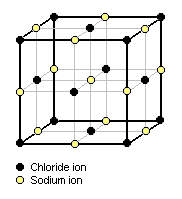 That is within 0.5 percent of the 2.165 g/cm3 given as the density of NaCl in the Handbook of Chemistry and Physics.[6]

From the ideal gas law, the density of an ideal gas may be expressed as:

and the density of a real gas (as differentiated from an ideal gas) may be expressed as:[7]

is the compressibility factor,

is the molar gas constant,

is the molecular mass, and

is the absolute temperature.

At atmospheric pressure and 0 °C, most gases may be considered to be ideal and therefore the compressibility factor,

Perhaps the highest density known is reached in neutron star matter (see neutronium). The singularity at the centre of a black hole, according to general relativity, does not have any volume, so its density is undefined.

The densest naturally occurring substance on Earth is iridium, at about 22,650 kg/m3. Aerogel is the world's lightest solid. Also, note the low density of aluminium compared to most other metals. For this reason, aircraft are made of aluminium.

The relation between temperature and the density of solids and fluids

The coefficient of cubic expansion,

is raised in temperature to

, then it has a new volume,