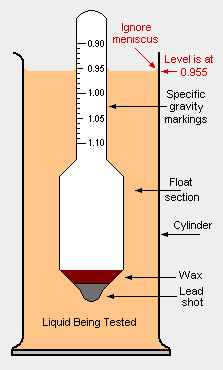 A hydrometer is an instrument typically used to measure the specific gravity (SG) (or relative density) of liquids; that is, the ratio of the density of the liquid to the density of water with both at the same temperature. It is usually made of glass and consists of a small diameter cylindrical stem and a larger diameter float section weighted with mercury or lead shot (sealed with wax) to make it float upright. The larger diameter float section is necessary to provide the displacement volume needed for the proper buoyancy of the hydrometer

The stem contains a rolled paper marked with the scale being used. There are a great many different hydrometer scales commonly used to measure liquid densities in: petroleum crude oil marketing and refining; making wine, brewing beer and making whiskey; refining sugar; producing sulfuric acid and other industrial chemicals.

In the past, hydrometers have also been referred to as gravimeters, densimeters or areometers. If the float section (see adjacent drawing) includes a built-in thermometer, the instrument is then referred to as a thermohydrometer.

The many hydrometer scales that are commonly used include:

for liquids lighter than water and

for liquids heavier than water and

Note: Many literature sources present the above equations with the specific gravity reference temperatures being 20°C, which ignores the small difference between specific gravities at 60 °F and 20 °C.[4]

Brix gravity
This scale was developed in the 1854 by Adolf Ferdinand Wenceslaus Brix, a German or Austrian engineer and mathematician. It is widely used in beer brewing, wineries, sugar refining and fruit juice industry. It is expressed as:[5][6]

Oechsle gravity
This scale was developed in the 1830's by Christian Ferdinand Oechsle, a German pharmacist and goldsmith. It is used in Germany, Austria and Switzerland in wineries and beer brewing. It is expressed as:[5]

Plato gravity
This scale was developed in 1918 by Dr. Fritz Plato , a German scientist. It is primarily used in the beer brewing industry and it is expressed as:[7]

The origin of the Plato scale lies in the Balling Scale developed in 1835 by Carl Joseph Napoleon Balling which was recalibrated by Brix in 1854 and renamed the Brix scale. In 1918, Dr. Plato then developed his scale by improving and correcting Balling's original work. Basically, the Balling, Brix and Plato scales are identical up to the fifth and sixth decimal place.[8]

Twaddell gravity
In the 19th century, this scale was developed in Glasgow, Scotland by William Twaddell, an instrument maker.[9] It is used in many industries and it is expressed as:[2]

used only for liquids heavier than water

Knowledge of relative density or specific gravity has been with us since the days of Archimedes in 250 BC, with the observation that light objects can float while heavier ones will sink in water.[10] Hypatia (born ca. 350 and died 415 AD), a Greek scholar from Alexandria in Egypt and considered to be the first notable female mathematician, is reputed to have invented the hydrometer.[11]

Several key figures in the history of science have mentioned the hydrometer in their work, including Galileo in 1612. In the 18th and 19th centuries, industrial development in Europe spurred the need for the hydrometer. It gained fame due to public controversy over alcohol taxation since the hydrometer was used in the distillation industry to measure alcohol content and determine excise taxes in England.

A great deal more detailed history is provided in the book, edited by Holmes and Lever, about the history of instruments in chemistry from the days of the alchemists through the creation of the modern chemistry laboratory.[12]