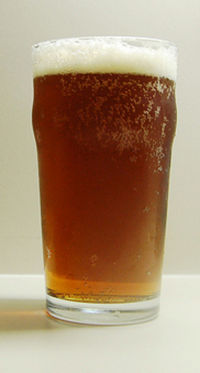 © Image: John McStravick
British, amber-colored beer in a glass. Beer is made using many different methods, and comes in many different tastes and colors.

Beer is a naturally alcoholic fermented beverage, made from one of a number of grains, yeast and additional flavouring agents, such as hops.

Although the precise origin or origins of beer cannot be determined with precision, the history of its development can be traced along with the history of civilization, generally. Evidence from China indicates that an alcoholic mixed fermented beverage of rice, honey and fruit was being produced as early as 9,000 years ago.[1] The hardest evidence dates the brewing of beer to around 4000 B.C. in the ancient Mesopotamia region.[2]

In Ireland, up to about 4,500 examples of "fulacht fiadh" have been found. Dating from the Bronze Age - around 1500 to 500 BCE - these were mounds containing large wooden troughs. Conventional wisdom holds that these were used for cooking, by filling the trough with water and heating it with hot stones. Recent experimental archaeology has shown that it would have been easily possible to use them to brew a palatable ale.[3]

The techniques of beer-making made a leap forward around the year 900, when brewers in Bavaria began to use the flowers of the hops vine (humulus lupulus) to flavor their beer and serve as a preservative. The efficacy of hops in preventing spoilage gave beer a distinct advantage over other fermented beverages, and beer became correspondingly more popular.[4]

Another development in beer brewing also occurred in Bavaria, when brewers began to use bottom-fermenting lager yeast, and allowed their beers to develop more slowly at lower temperatures.[5] This is in distinction to the top-fermenting yeasts used until then, which are frequently called ale yeasts. Both strains of yeast remain in widespread use today.

Some regions of the world have strong association with beer, such as Belgium which is renowned as a center of beer brewing, and has a long history of creating many specialist beers that have been brewed in the region for centuries. Traditionally, Flemish specialty beers were prepared by local Trappist monasteries. Today more than 450 different beers are produced in Belgium.[6] In Central Europe, Czech Republic is often associated with beer, due to the location of the city of Plzeň, where the original Pilsner was developed. Germany with over 5,000 [7]brews is well known for its many breweries and styles of beer. The German state of Bavaria hosts the largest beerfest in the world, The Munich Oktoberfest, which occurs every year in the two weeks prior to the first Sunday of October and features only beer brewed within the city limits.

One of the early regulations regarding beer production was the Bavarian Purity Law of 1516, which required beer to be made only with hops, barley, and water. Yeast was added to the list of approved ingredients once its role in fermentation was more understood. Wheat beers, which are also a specialty of Bavaria, were made by special dispensation of the Bavarian royalty.[8] There is no such exception for other flavouring agents - hence, Belgium and other countries have taken the lead in the market for fruit beers.

The beverage is one of the most common alcoholic drinks in popular culture.

Many locales have a local brewer that is associated with that particular region. Sometimes the type of beer selected by the drinker takes on almost tribal connotations based on unrelated factors such as geography or favorite sporting code. In Australia for example, there are strong regional allegiances associated with the brands VB of Melbourne; Tooheys of Sydney and XXXX of Queensland.

Some beer companies have produced television commercials which are classics of pop culture. The Budweiser company's advertisements featuring draft horses are an example, as is the "big ad" of the Carlton company. Beer ads are associated with television coverage of the American Superbowl; the cost of such ads runs to hundreds of thousands of dollars.

"Home brewing" is also a popular hobby in many areas. Individuals may buy all of the equipment they need to brew at home from suppliers found in most major cities and may even have starter kits shipped to them.

Today beer remains popular, although in some countries there has been some increases in wine drinking that has seen some drinkers substitute to wine from beer, sometimes on the basis of healthy associations proferred by some research claiming that moderate consumption of alcohol in wine form offers health benefits.

Some beers have responded by issuing low alcohol or low carbohydrate versions of new brands or existing brands.

Beer is a popular beverage at many parties.

Beer can be separated into two classes: ales and lagers, each with several style categories.[9] The difference in these two class distinctions comes from the type of yeast (and temperature) used to ferment the wort. Ale is usually fermented at higher temperatures (typically between 65 to 80 degrees Fahrenheit) while lagers are usually fermented at colder temperatures (typically between 40 to 55 degrees Fahrenheit).

Other societies also produce traditional fermented alcoholic beverages. In East Africa, pombe, local beers made from various fermented grains, are popular; some varieties are served hot, in communal clay pots from which the beer is drunk using long straws.