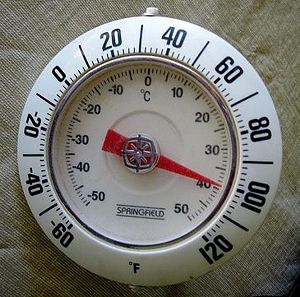 The Fahrenheit scale is a temperature scale named after the German physicist Daniel Gabriel Fahrenheit (1686 − 1736), who proposed it in 1724. The symbol of a degree Fahrenheit is °F and the scale has now been largely replaced by the Celsius scale although it is still in use for non-scientific purposes in the United States.

The different temperature scales (kelvin, Celsius, Fahrenheit and Rankine) can be converted into each other. (See the Temperature conversion article.)

The Fahrenheit scale was the primary temperature standard for climatic, industrial and medical purposes in most English-speaking countries until the 1960s. In the late 1960's and 1970's, the Celsius (formerly Centigrade) scale was adopted by most of these countries as part of the standardizing process called metrication.

Only in the United States, Belize[1] and perhaps a few other countries do the Fahrenheit and Rankine systems continue to be used, and mainly for non-scientific use. Most other countries have adopted Celsius as the primary scale in all use, although Fahrenheit continues to be the scale of preference for a minority of people in the United Kingdom, particularly when referring to summer temperatures. Many British people are conversant with both the Celsius and Fahrenheit temperature scales.